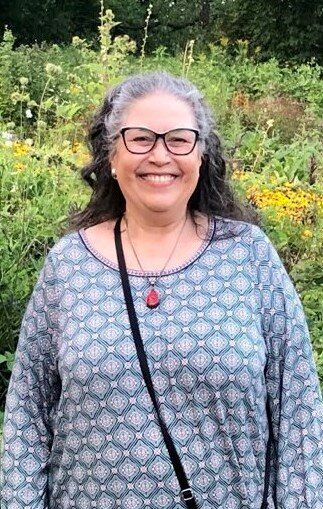 Please share a memory of Janet to include in a keepsake book for family and friends.
View Tribute Book
Janet Vera Morrison of Northport, Maine died tragically as the result of a head-on collision in Rockport, Maine on Saturday, October 16, 2021, one week after her 68th birthday. She is preceded in death by her parents, Sergio and Christie (Nellis) Vera; her husband Richard B. Morrison; and her beloved cat, Agamemnon, aka “The Bunyap.” She leaves a gaping hole in the hearts of her friends and family. She is survived by stepdaughter Leigh Frayn; stepson Daniel Morrison and stepdaughter-in-law Tinsley Morrison; step-grandchildren Justin Raphael, Amanda Nichols, Tom Morrison, Lillian Morrison; step-niece Josselyn Burgess; and step-nephews Donald Morrison and David Rassmussen. She is also survived by many dear friends including Joy Meyers of Quakertown, Pennsylvania; Mary Ellen Whitaker of Natick, Massachusetts; Deirdre Peterson of New York City, and many great friends and neighbors in Temple Heights, Maine. Vera was a gifted photographer with a passion for capturing nature. Some of her photos will be featured in the “Zoom Lens Group” photography exhibit in the Fernald Art Gallery at the UMaine Hutchinson Center in Belfast from January thru March 2022. Vera was born in 1953 in Perkasie, Pennsylvania. She graduated from DeSales University in Center Valley, Pennsylvania, majoring in Theater. After graduation, she worked in media production, most notably as chief photo stylist for Rodale Press in Emmaus, PA, where she worked on a wide variety of books and the popular magazines Runners’ World, Organic Gardening, New Shelter, and Bicycling. She moved to Boston in 1986 and began working as a costume maker and dresser for the Boston Opera House on productions including Madame Butterfly and Macbeth starring Christopher Plummer and Glenda Jackson. She also worked at the USS Constitution Museum, otherwise known as “Old Ironsides.” A memorial service will be held this spring. Please contact Dan Morrison at dsmorrison999@gmail.com if you’d like information about where and when. In lieu of flowers, memorial contributions can be made to Hospice Volunteers of Waldo County, the Alzheimer’s Association, the American Cancer Society, Doctors without Borders, or Planned Parenthood.
To plant a beautiful memorial tree in memory of Janet Vera, please visit our Tree Store

A Memorial Tree was planted for Janet
We are deeply sorry for your loss ~ the staff at Riposta Funeral Home
Join in honoring their life - plant a memorial tree
Services for Janet Vera
There are no events scheduled. You can still show your support by planting a tree in memory of Janet Vera.
Plant a tree in memory of Janet
Print
Online Memory & Photo Sharing Event
Online Event
About this Event