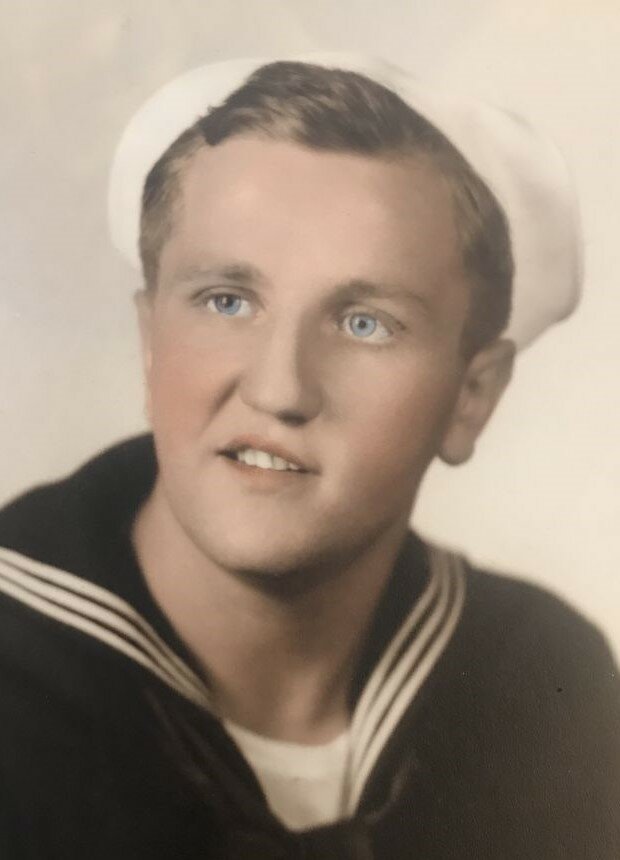 Please share a memory of Mario to include in a keepsake book for family and friends.
View Tribute Book

Mario “Butch” J. Nardone passed away at 95 on January 6th, 2023 at Tall Pines, Belfast, Maine after a brief illness.  He was born on June 4, 1927 in Lynn, Massachusetts to the late Mario and Clara (Laurino) Nardone and is survived by his loving wife, Lauretta, of Belfast, ME with whom he shared more than 71 years of marriage. He is also survived by his sister, Louise Lee of Wakefield, MA and is pre-deceased by his brother, Paul of Illinois and sister, Gloria of Peabody, MA.   He leaves his four sons, Dennis and wife Kim Nardone of Swanville, ME, Mark and Sandy Nardone of Ipswich, MA and Augusta, ME, Jay Nardone and Kathy Heming of Hampton, NH and Frye Island, ME, and Michael and Dawn Nardone of West Yarmouth, MA. He leaves a very long list of grandchildren, great-grandchildren, a great-great-grandchild, and nieces and nephews, all of whom loved him dearly and will miss him greatly.

Mario led a storied life, typifying so many of The Greatest Generation.  Born to a first-generation American mother and immigrant father just prior to the Great Depression, at a very poor time and place, Butch, as he was known by most had a difficult childhood where money and opportunities were scarce.  In a span of three months he lost his mother and father.  An orphan at age 16 without options, and with World War II being waged around the globe, he enlisted in the Navy and served proudly as an electrician’s mate aboard the U.S.S Oklahoma City, where he was injured during an attack on his ship.  He carried the pain of that injury for the rest of his life. He and his shipmates also toured Hiroshima and Nagasaki shortly after the atomic bombings of those cities and was horrified by what he had witnessed.  At the end of the war, he took advantage of the GI Bill and got his start in the auto body business.  He was a very skilled mechanic of his chosen trade but mostly pursued his passion as what would now be called a side hustle, working at the garage primarily nights and weekends.  He always maintained a full-time civil service position, his “day job,” with the City of Lynn School Department so that he could better provide for his family of six.  He started as a custodian, then worked as a supply clerk, and finally in the carpentry and maintenance division until retiring in the early 1980s following a disabling injury.

During retirement, Mario pursued his second passion of collecting and repairing antique clocks, which was less physically demanding.  He continued with this, and with “tinkering” in his workshop with his grandchildren until his failing eyesight and dexterity eventually prohibited even that.

He and Lauretta settled in Lynn, MA where they raised their four boys.  Shortly after marrying, they began visiting Lauretta’s grandparents on the outskirts of Augusta, ME around Togus Pond.  Lauretta’s grandfather, a veteran of World War I, along with several comrades in arms, were drawn to the area following The Great War given its bucolic beauty and proximity to the Togus VA. In the 1950s, Butch assisted with the construction of what is now known as Hayes Road, and by the early 1960s had built a summer camp on Togus, where they summered with their growing family for decades. In the late 1980s   Butch and Lauretta undertook extensive renovations to the camp to make it into their year-round home, where they resided until 2019 when they moved to Tall Pines in Belfast, ME.  Togus served as the focal point and gathering place for Mario’s extended family for decades, and everyone who was there has a story of how “Gramp” either taught them to water ski or swim, even though he could barely do either.  Many epic events, including lobster and clam bakes, fireworks displays, and anniversary parties will always be cherished memories.

In later years, Butch and Lauretta wintered near Gulf Shores, AL where they built many more friendships and lasting memories.

Throughout his long life, his main mission was always to make a better life for those who followed.   All who knew and loved him know that he lived up to that promise in spades.

Mario’s family would like to acknowledge and thank the staff of Tall Pines for the kind and thoughtful care they have provided.

In lieu of flowers, donations may be made to the charity of your choice.

Share Your Memory of
Mario
Upload Your Memory View All Memories
Be the first to upload a memory!
Share A Memory