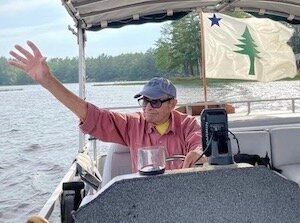 Please share a memory of James to include in a keepsake book for family and friends.
View Tribute Book

Jim was a cabinetmaker and an expert in his field. His many beautiful wooden creations include chests of drawers, tables, benches, boxes, signs, and advent calendars,  currently being enjoyed by people from all over the world.

Jim was born in Waltham, Massachusetts on July 18, 1930, to parents Walter and  Zilpha. He grew up with his sister Drusilla in Cape Porpoise, Maine. There he first discovered his knack for woodworking, and developed a lifetime love of boats and being out on the water. He acquired his first power tool - a band saw- at the age of 13. He served in the Coast Guard from 1949 to 1953, before becoming a machine parts salesman.

In 1975, Jim and his wife Lori moved to Warren, Maine where he pursued his dream of a woodworking career. He was one of the “original five” woodworkers at Lyman Morse  Boatbuilding in Thomaston. He would go on to work there for 30 years, crafting elegantly finished cabinetry for yachts and sailboats from around the world. In 1987, Jim and his wife moved to Crawford Lake in Union, ME.

Jim was a lifelong Mason and a master of the St. George Lodge. He served as ambulance director in Warren and a selectman in Union and— perhaps most legendarily— as captain of the Crawford Queen, his beloved boat. Over the years he captained sunset cruises around the lake, where neighbors became friends and formed a vibrant lakeside community.

He will be missed by his many beloved friends from around the lake and beyond.

He is survived by his wife of 49 years, Lori, and 4 children, Tom, Libi, Richard, and  Jennifer.

A celebration of his life will be held in the summer of 2023 at the home he built on  Crawford Lake.

To plant a beautiful memorial tree in memory of James Bailey, please visit our Tree Store

Look inside to read what others have shared
Family and friends are coming together online to create a special keepsake. Every memory left on the online obituary will be automatically included in this book.
View Tribute Book
Services for James Bailey
There are no events scheduled. You can still show your support by planting a tree in memory of James Bailey.
Plant a tree in memory of James

Share Your Memory of
James
Upload Your Memory View All Memories
Be the first to upload a memory!
Share A Memory
Plant a Tree