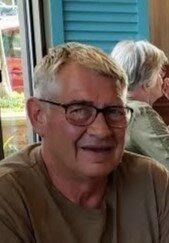 Please share a memory of Scotty to include in a keepsake book for family and friends.
View Tribute Book

Scott was born on October 1st in Island Falls, Maine. He had a smile that could light up the day. He was a loving husband, incredible father, and grandfather. you will never meet a harder worker. His ability to work and plan his way through difficult situations with a smile made him a master of his house-moving abilities. He started working in the logging industry at the age of 13 working with his father. In 1981 he married the love of his life and moved permanently to the coast to build their extraordinary life together. He was a man of endless skill and talent who had a life filled with adventurous occupations that included, Logger, Sawyer, Snow Plow Driver, American Chestnut conservationist, Fabricator, Rigger, Electrical Assistant, Heavy Equipment Operator, Structure Jacking and Moving.

Scott was wise, intelligent, and artistic, he had one-of-a-kind creativity and imagination. He was filled with integrity, compassion, and generosity. He loved history and reading. He was always at peace just wandering through the woods. He would often stop anything he was doing to take in the beauty and wonder of a sunset or the stars.

His most treasured times were with family and friends. Whether it was going on road trips, exploring museums, being at the race track, tobogganing with slab city, doing donuts in the back yard in some old junker, or taking in every lost child he ever met, and loving them like they were his own. Scott enjoyed life to the fullest.

Scott was predeceased by his father Clayton Richards, mother Nadine (White) Richards, brother Dale Richards, and sister Sharon (Richards) Anderson. He was survived by his wife Nadine (Watson) Richards, son Noah Richards and his fiancee Margarette (Meg) Lewis, his daughter Rebekah Richards, and bonus sons Chris Cole, and Adam Kinney, His grandchildren Tyler, Zoie, Hayley, Tristan, Alyssa, his brother Eric (Ricky) Richards his wife Ruth, his sister Joanne (Richards) Cushing. As well as always being the "favorite uncle" to a large group of deeply loved nieces and nephews. He was also survived by a limitless group of cousins, extended family, and friends.

There will be a celebration of his incredible life to be held on Sunday, August 7, 2022, at 3 p.m. at 1430 Moody Mountain Road Searsmont, Maine. Please write down a memory of Scott to leave with the family and bring your favorite dish to share.

Share Your Memory of
Scotty
Upload Your Memory View All Memories
Be the first to upload a memory!
Share A Memory