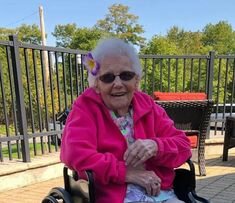 Please share a memory of Mary to include in a keepsake book for family and friends.
View Tribute Book
Mary Knowlton Curtis, 98 of Belfast, passed away at Bayview Manor on April 28, 2022. She was born in Freedom Maine on May 11, 1923 to her parents Theodore L Knowlton and Elsie Brown Knowlton. Mary was predeceased by her parents, her husband of 56 years, Carlton Curtis and her special friend and partner of 22 years, Hilding Seastrom. She was also predeceased by her sister Ruth Drew and brother Ted L. Knowlton. Mary is survived by her daughters Nyoka Palmer of Belmont, Paulette Martin of Rockport, Sheena Rapoza of Dade City and Belmont and Kim Martin of Swanville. She is also survived by her grandchildren; Robin, Ricky, Kristen, Daren, Dean, Nicki, Jodi, Julia and Trey, nine great grandchildren, seven great-great grandchildren with an eighth on the way, as well as many special nieces and nephews. Mary was a full-time housewife and mother. She and Carlton had a large circle of friends which included two very special friends, Bill and Doris Benner, with whom they spent many good times in their neighboring camps on Frye Mountain. Later on, they spent many good times at their camp on Eagle Lake. Mary could be found on the back of Carltons’ motorcycle many weekends and they both loved to dance. Their daughters usually accompanied them to the dances, and they all learned to dance on their fathers’ toes. Mary was a good sport and was known to try anything once. Whether it be driving her dune buggy or the annual shopping trip with her girls and friends than she joined for over 30 years, Mary was the life of the party. She and Doris were quite often the brunt of practical jokes on those trips, and they took them all in stride. She was ready for a challenge, even in her later years. She sang her first karaoke at 95 at Bowens Tavern and took her final motorcycle ride the same year with her granddaughter’s husband. This event even made the papers. She was famous for her chocolate cake with warm “poor mans sauce” (that her granddaughters are still trying to replicate) and made a chocolate cake every day when her girls were young. She and Carlton loved to travel and spent the last few winters before his death in Florida and Arizona. The family would like to thank the staff at Bayview Manor for their wonderful care over the last few years. They would also like to than Kindred Hospice for their care and respect in her final days. At Mary’s request, there will be no funeral. There will be a celebration of life June 12, 2022 at Belmont Community Hall at 2pm.
To plant a beautiful memorial tree in memory of Mary Curtis, please visit our Tree Store

Look inside to read what others have shared
Family and friends are coming together online to create a special keepsake. Every memory left on the online obituary will be automatically included in this book.
View Tribute Book
Services for Mary Curtis
There are no events scheduled. You can still show your support by planting a tree in memory of Mary Curtis.
Plant a tree in memory of Mary

Share Your Memory of
Mary
Upload Your Memory View All Memories
Be the first to upload a memory!
Share A Memory
Plant a Tree