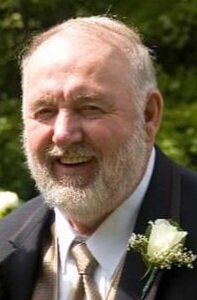 Please share a memory of Ronald to include in a keepsake book for family and friends.
View Tribute Book
Ronald Ezra Newton Jr (Ronnie) was born to the late Ronald and Madeline Newton in Jefferson, Me on March 27, 1947. Ronnie passed away on February 20, 2022, after a long battle with Parkinson’s. Just like he dealt with all experiences in life, he managed his illness with strength and grace. On his final day on earth, he was surrounded by his loving wife of 50 years, his children, and grandchildren. Ronnie was preceded in death by his parents; a brother, Wendell, and sisters, Joanne, Rebecca, and Rose. He is survived by his wife, Roxanne Newton (Cram) of Liberty, daughters, Bethany Bartlett (Husband, Dean Bartlett) of Liberty; Lisa Gillespie (Husband, Bill Gillespie) of Montville, and Grandchildren, Chelsea Hubbard (Fiancé Zach Forsythe) of Waterville and Brandon Hubbard (Fiancé Gabi Brassart) of PA. His siblings, Deloris, Eugene, Pat, Ramona, Kathy, Alice, Ricky, David, and Harriet. Ronnie joined the Army on March 18, 1969, where he spent time serving in Germany until he was honorably discharged on November 30, 1970. He met the love of his life, Roxanne, when he returned stateside. While they were dating, Richard and Doris Palmer opened their home to him for a year and loved him as their own. Ronnie and Roxanne married in 1972 and went on to have two daughters. He was a wonderful Husband and Dad who was always there for them through their ups and downs and was happy to have been promoted to a Papa in 1996. He took so much pride in his family, as they did with him. In 1971, Ronnie started his career at Robbins Lumber and moved on to being a self-employed mechanic after 32 years. He had a love for all automobiles that began in his childhood but was very particular to Fords and loved to debate with anyone on how Fords are better than Chevy’s. He enjoyed being a mechanic and helped whoever he could. He never looked to get rich, just loved what he did. He will forever be remembered for his laugh, his teasing, his love of candy, scratch off tickets, and smoking up the road with his Trans Am. Ronnie’s family wishes to extend their sincerest gratitude to Dr. Molison and everyone in his office at the Walker Health Center in Liberty for answering their questions, seeing him in the office or his home and just going above and beyond in their care of him. They also wish to extend their appreciation for Beacon Hospice and his Personal Caregiver, Bonnie. A funeral service will be held at the Liberty Baptist Church on March 12, 2022 at 11am with a luncheon to follow.
To plant a beautiful memorial tree in memory of Ronald Newton Jr., please visit our Tree Store

Look inside to read what others have shared
Family and friends are coming together online to create a special keepsake. Every memory left on the online obituary will be automatically included in this book.
View Tribute Book
Services for Ronald Newton Jr.
There are no events scheduled. You can still show your support by planting a tree in memory of Ronald Newton Jr..
Plant a tree in memory of Ronald

Share Your Memory of
Ronald
Upload Your Memory View All Memories
Be the first to upload a memory!
Share A Memory
Plant a Tree