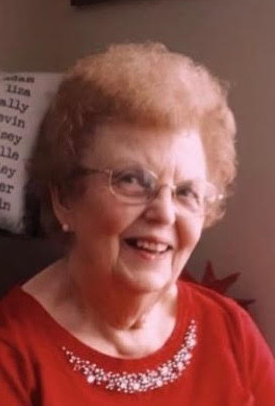 Please share a memory of Joan to include in a keepsake book for family and friends.
View Tribute Book

She was born February 6, 1931, in Biddeford, Maine, the daughter of James S. Ward, Jr. and Eleanor Burtchell Ward. She grew up on a potato farm in Fort Fairfield with her mother and stepfather, Neil P. Shaw. She graduated from Fort Fairfield High School, class of 1948. Joan graduated from Maine General Hospital in Portland, Maine, class of 1951. She worked as a Registered Nurse in Portland and at the New England Medical Center in Boston, MA. Joan married Dr. Charles A. Bunnell on August 28, 1952.

Joan was a member of the First Church in Belfast, a member of the Eastern Star, and an Honorary Member of the Belfast Garden Club, having served many years as Civic Beautification Chairman. She started her own business, Corner Country Crafts, in her home at 74 Church Street in 1991. Most of all, she dearly loved all her family.

Joan is survived by her daughters, Janet L. Bachelder of Belfast and Andrea B. Walston and husband, Dana of Weymouth, MA, and her son-in-law, Ken M. Weymouth of Belmont. Five grandchildren, Adam C. Weymouth and wife Kelly of Morrill, Liza A. Edebor of Lakeway, TX, Sally M. Miles and husband Tyler of Waldo, Kevin D. Bachelder and wife Misty of Gray and Lindsey E. Bachelder and fiancé Ryan of Nashville, TN.

A brother, James S. Ward, III of Alfred, two sisters, Carolyn S. Hardison and husband Robert of Wells and Pat Libby and husband Bruce of Center Conway, NH, sister-in-law, Brenda B. Brown and husband Burtt of Yarmouth and many nieces and nephews.

Those who wish may make donations in her memory to Hospice Volunteers of Waldo County, PO Box 772, Belfast, ME 04915. Memories and condolences may be shared with the family at ripostafh.com.

Share Your Memory of
Joan
Upload Your Memory View All Memories
Be the first to upload a memory!
Share A Memory