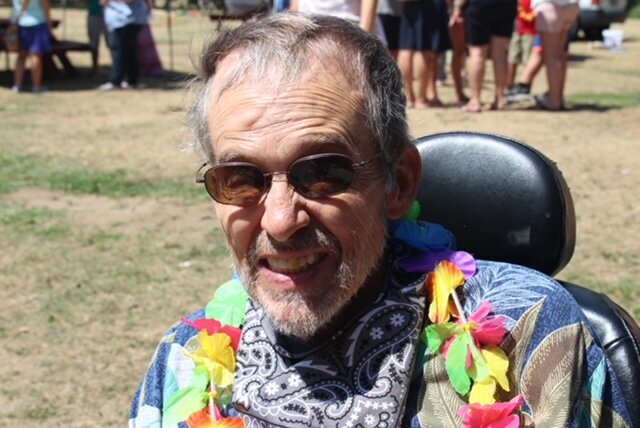 Please share a memory of Wade to include in a keepsake book for family and friends.
View Tribute Book
Wade Beach, 70, of Portland, passed away on November 23, 2021, at his Group Main Steam home in Portland surrounded and supported by his Direct Support Staff.  He was born in Camden, Maine on April 10, 1952.  He lived with his parents and siblings until his schooling began at the Pineland Center, and then attended the Baxter School for the Deaf.  Later in life, he lived in his own apartment with minimal supports and enjoyed riding his bike around town greeting everyone that he met until his health declined.  At that time, he moved to a group home and was supported by Group Main Stream where he lived for many years.   His friends and family describe Wade as a brave, spirited, and sweet man, who had a profound sense of humor, who liked having money in his wallet, and who expressed much pride in his independence. The things that he most enjoyed were being part of the Deaf Culture. For many years he attended many Deaf Culture events, including holiday events, and picnics, he attended two deaf community day programs, Goodwill Ind. "Life Works" and Project for Support Living. Wade enjoyed going to Camp Sign-A-Watha for years to be with so many friends.  He was a very social person, who had many friends, especially who were part of the Deaf Culture.  Wade participated in Special Olympics and was proud of his awards. Wade had many interests and hobbies. Wade considered himself an artist and enjoyed painting outside in nature.   He enjoyed working on his many art projects, woodworking, painting, gardening, and painting rocks for gifts.  He enjoyed collecting can tabs, watching The Three Stooges with friends, camping at Camp Tall Pines, and accessing his community.  In his later years, he enjoyed sitting outside or rolling through his neighborhood greeting his neighbors as they walked by, petting the neighborhood dogs and cats with a smile.  Wade was tough and fought a terrible illness for more than 20 years. His friends, long-term staff, and family want to thank the Northern Light Hospice Care and Group Main Stream for providing ongoing supportive and loving care to our dear friend.  He is predeceased by his parents Robert and Leiella Beach.  Wade is survived by his brother Rocky Beach and wife Sheila Beach, Clay Beach and wife Cheryl, and his sister Sandra Deschenes.   A graveside service will be held at Grove Cemetery in Belfast on May 12th, 2022 at 11 am. Arrangements are under the care of Riposta Funeral Home.  Memories and condolences may be shared with the family at www.ripostafh.com
To send flowers to the family or plant a tree in memory of Wade Beach, please visit Tribute Store
Thursday
12
May

Share Your Memory of
Wade
Upload Your Memory View All Memories
Be the first to upload a memory!
Share A Memory
Send Flowers
Plant a Tree