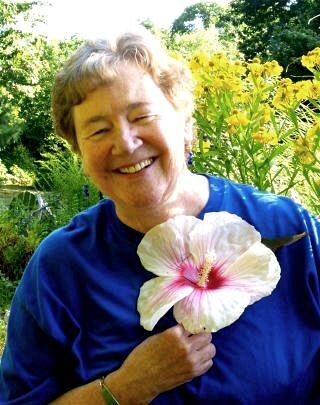 Please share a memory of Coralee to include in a keepsake book for family and friends.
View Tribute Book
Coralee Grass (Smith), 78, died with her husband and daughter at her side October 9th at Northern Light EMMC Hospital. She was born in Brooks, Maine, the eleventh of thirteen children of Evelyn and Clyde Smith. She graduated from Morse Memorial in 1962. In her youth, she excelled at sports, playing on the high school softball team while in the 8th grade, and later becoming a team captain for the high school basketball team. She had a competetive spirit which later in her life she put to good use while enjoying a game of bocce or horseshoes with family and friends. In 1963 she married her high school sweetheart Dana Grass. Voted “biggest flirt” in the yearbook, she was bound to win the heart of the guy voted “best looking”. They settled in Brooks early in their marriage, and later moved to Winterport, where they built 2 houses and renovated an old farmhouse. For the past 7 years they have resided in Bucksport. Coralee and Dana enjoyed 58 years of marriage. Coralee was a hard worker. For many years she was employed in factory work. After high school she was employed at the Hathaway shirt factory in Waterville. She later worked at the pants factory in Belfast and then at Viner Shoe in Bangor. When Viner Shoe closed she was given the opportunity to attend college. In her mid 40’s she returned to school earning an associate degree in paralegal studies. She was employed by Rollerson Realty and Prudential Real Estate until her retirement. One of her favorite things was the many camping trips and snowmobile outings she took with family and friends to the North Maine woods. This was a favorite pastime: Pitching a tent or parking a camper near a lake, pond or stream, cooking a good meal on a campfire, playing a game of cards, enjoying the local wildlife. She once walked back from an early morning trip to the outhouse, unaware that a moose was quietly plodding along the beach behind her. Many good stories emerged and memories were built out of these trips to the woods. She enjoyed making beaded jewelry. On more than one occasion she is known to have removed a bracelet she’d made from her own wrist to give to a stranger who had admired it. She was generous and if you had just a brief but kind exchange with her, she was likely to call you, “a friend”. Her appreciation for nature showed itself when she took up painting later in life. Birds were a favorite subject. If you knew Coralee, you probably have at least one of her paintings or some of her jewelry. Coralee suffered many health problems through the years. In spite of living with chronic pain and the physical limitations her underlying conditions created, she remained cheerful and positive, taking joy in her relationships with family and friends. She was always willing, even when she wasn’t always able! She is survived by her husband, Dana Grass of Bucksport Maine, her daughter Michelle (Micaela) Grass of Montville, Maine, her sister Coleen Putnam of Brooks, Maine, her brother Byron Smith of Three Rivers, MA, and too many nieces and nephews to name. She is predeceased by a daughter, her parents, 7 brothers and 4 sisters. A celebration of life will be held in honor of Coralee next Spring/Summer. Date and place to be announced. To share a memory please visit the Riposta Funeral Home tribute wall.
To plant a beautiful memorial tree in memory of Coralee Grass, please visit our Tree Store

Look inside to read what others have shared
Family and friends are coming together online to create a special keepsake. Every memory left on the online obituary will be automatically included in this book.
View Tribute Book
Services for Coralee Grass
There are no events scheduled. You can still show your support by planting a tree in memory of Coralee Grass.
Plant a tree in memory of Coralee

Share Your Memory of
Coralee
Upload Your Memory View All Memories
Be the first to upload a memory!
Share A Memory
Plant a Tree