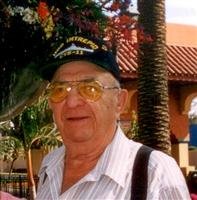 Please share a memory of Roland to include in a keepsake book for family and friends.
View Tribute Book
Roland Albert Yeaton, 87 of Belfast, passed away Saturday, October 17, 2009, surrounded by his family. The son of Benedict and Maud (Shores) Yeaton, Roland was born and raised on the same farm as his father in Norridgewock on November 5, 1921. He became a skilled farmer at a young age. He enjoyed telling many stories about the lives of the farmers along the Kennebec and Sandy Rivers throughout Somerset County. A typical annual planting consisted of 300 acres of potatoes, which included using part of the old Ox Bow Farm land. A Marine aboard the USS Intrepid CV-11, he served in the Pacific during WWII, ending up in Yokosuka, Tokyo during the occupation. He stood guard and crewed anti-aircraft weapons on the ship and was asked to continue in the Marines as a Ceremonial Guard in Washington, D.C., but declined and returned home to Maine, where he married his sweetheart, Ruth. They moved to the Mid-Coast area after Roland went to work for H.E. Sargent Construction Co. in Stillwater for easier commuting. His dedication to everything he did including his 25-year career with Sargent, instilled strong ethical values, commitment and dedication in his children. Nothing instilled that more than watching our father arrive home on a Friday evening after dark, then preparing to leave again for various parts of the state in the early hours of Monday morning, arriving on the job site after a 4 hour drive, to begin his 12 hour work day. After his wife’s passing, Roland knew he had more work to do and time was short due to his cancer. His last 19 months he spent teaching his children and grandchildren how to be strong, to carry on in life and to cherish every single day. We have all learned that lesson well, thanks to him. Dad held a special appreciation for his sons-in-law, Ronnie and Jack who would always be available to do the things that became impossible for him. He was a life member of VFW Post 3108 and member of the American Legion Post 43. He was predeceased by his wife of 54 years, Ruth E. (Carr), on March 31, 2008; a son, Richard; a grandson, Michael Fuller II, and sister Georgia Green. He leaves behind his seven children, Roland (Skip) and wife Gail of Duluth, MN, David and wife Susan of Woonsocket, RI, Margaret (Peggy) Tower and husband Ronald of Belfast, Fran Riley and husband Jack of Belfast, Roberta Fuller of Belfast, Debra Pendleton and husband Stephen of Stockton Springs, Robert and wife Ruth of Belmont, 17 grandchildren and 9 great-grandchildren; brothers Dean and wife Elvina, and Richard, all of Norridgewock, sisters Evelyn Fullbright from Cedar Falls, IA, Lucile Koester of Florissant, MO, a sister-in-law, Sr. Frances Carr of Sabbathday Lake Shakers, New Gloucester, ME, several nieces and nephews and cousins. Friends may call at Crabiel-Riposta Funeral Home, 182 Waldo Avenue, Belfast on Thursday, October 22nd for visitation between 12 and 1 p.m. Funeral service will be held at 1:00 p.m. with Pastor Storm Gould officiating. Interment with military honors will be at the Grove Cemetery in Belfast. On-line condolences may be placed at www.crabielripostafuneralhome.com.
To plant a beautiful memorial tree in memory of Roland Yeaton, please visit our Tree Store

Look inside to read what others have shared
Family and friends are coming together online to create a special keepsake. Every memory left on the online obituary will be automatically included in this book.
View Tribute Book
Services for Roland Yeaton
There are no events scheduled. You can still show your support by planting a tree in memory of Roland Yeaton.
Plant a tree in memory of Roland

Share Your Memory of
Roland
Upload Your Memory View All Memories
Be the first to upload a memory!
Share A Memory
Plant a Tree