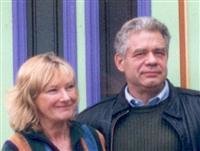 Please share a memory of Lawrence to include in a keepsake book for family and friends.
View Tribute Book
LAWRENCE “LARRY” GLEESON, III, 67, died unexpectedly October 22, 2009 in Belfast. He was born in Bryn Mawr, PA February 17, 1942, the son of Lawrence and Susan (Jamieson) Gleeson II . Larry was U.S. Air Force veteran serving in the Vietnam era where he engineered and invented several new parts for aircraft. Larry and his wife Cathy moved into hydroelectric alternative energy and were one of the first to re-start this process in the early 70s. He was always active in his community participating in many civic boards and was always eager to engage in vibrant discussion. He was a loving husband, father and grandfather who enjoyed raising his family. Larry would be the first to tell you that he was actually a mathematician although he always had a zest for life and actively participated in it. He was predeceased by his parents and is survived by his wife of 44 years, Cathy Gleeson of Belfast; four sons, Renny Gleeson and his wife Pam of Oregon, Jason Gleeson and Diana of New York, Alex Gleeson and wife Lisa of Portland, Nick Gleeson and wife Rebecca of Virginia; two brothers, Chris and wife Bonnie Gleeson of Pennsylvania; Alan and wife Kate Gleeson of Connecticut; two sisters, Meg Gleeson and Barbara Gleeson, both of Connecticut; four grandchildren; four grand-puppies; many cousins, nieces and nephews. Friends are invited to call at the Crabiel-Riposta Funeral Home on Monday October 26th from 6-8 p.m. for a time of fellowship with the family. Graveside celebration of Larry’s life will be held October 31st in Westport, Connecticut. Those who wish may make donations in Larry’s memory to Belfast-Waldo County Humane Society, Inc., PO Box 479, Belfast, Maine 04915. On-line condolences may be placed at www.crabielripostafuneralhome.com.
To plant a beautiful memorial tree in memory of Lawrence Gleeson, please visit our Tree Store

Look inside to read what others have shared
Family and friends are coming together online to create a special keepsake. Every memory left on the online obituary will be automatically included in this book.
View Tribute Book
Services for Lawrence Gleeson
There are no events scheduled. You can still show your support by planting a tree in memory of Lawrence Gleeson.
Plant a tree in memory of Lawrence

Share Your Memory of
Lawrence
Upload Your Memory View All Memories
Be the first to upload a memory!
Share A Memory
Plant a Tree