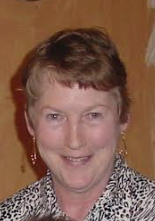 Please share a memory of MaryAnn to include in a keepsake book for family and friends.
View Tribute Book

MaryAnn graduated from Summit High School in 1958, and attended Cedar Crest College in Allentown, Pennsylvania before leaving in June 1961 to join Dick in West Berlin, where he was stationed with the U.S. Army. They returned home in August 1962 and lived in New York City before moving to Arlington, Virginia in June 1965 when Dick joined the CJ.A. as a Russian affairs analyst and then moved from Sterling Virginia to Belfast, Maine in June 1995.

MaryAnn had two major goals: to have a loving family and travel the world; she achieved both to a fare-thee-well. She was Dick's loving wife and partner for over sixty-one years, "Mum" or "Mom" to not just her own children, grandchildren, nephews, and nieces, but many others in the neighborhood, all the kids that she tutored in northern Virginia, and any other "strays" that she encountered along the way. She was a great "listener" if anyone had a problem troubling them.

As for traveling, MaryAnn not only set foot in all 50 states, along with Canada and Mexico but spent more than a day or two on all seven continents -visiting some 35 different countries in all. Her trip to Antarctica in 2004 was a highlight -not to see penguins, but to witness the geologic wonders of the icecap -done on her own, unaccompanied by Dick or any other family member or friend. After that, she was determined to visit Africa, which she did in 2005 and again in 2006 -not to observe the wild animals in their habitat, but to get a sense of her own beginnings.

That was the biology major on the prowl, ever interested in the science of some matter. And she would bristle if anyone suggested that Ret or Drew derived their interest in medicine, gardening, or related matters from their father-insisting that she was the scientist in the family, noting that both of her parents had spent their working years engaged in scientific research.

MaryAnn was equally proud of both parents -her mother, who grew up on a farm in upstate New York, with roots back to the Mayflower; and her father, the son of German immigrants who made their way here in 1902, a research chemist at Bell Labs who had his daughter -not just son Peter - visit his laboratory to see his projects. How lucky she was as a young girl in the forties to be raised in a home where she wasn't considered any less important because she was female.

A quiet but devout Christian, especially after her "mountaintop experience" at the Billy Graham Crusade in 1956, she sang in the choir at his Crusade in Madison Square Garden a year later, and was active in the Roman Catholic, Episcopalian, and Lutheran Cursillo communities in northern Virginia throughout the 1970s and early 1980s.

Music and art were another important part of MaryAnn's life. Accomplished on the viola at an early age, she sang in the choir at Lehigh University's annual Bach festival in May 1959. Years later, she picked up a guitar to play folk songs at church services or the classrooms where she volunteered as a tutor or "homeroom mom." She also became a talented watercolors artist and ceramics sculptor during the 1970s while ostensibly just a stay-at-home housewife and mother. And she embarked on a new career in the late 1980s - first as a volunteer, and eventually a paid co-director of Travelers' Aid at Dulles International Airport outside Washington DC.

To sum up: MaryAnn was ready for any "great adventure" - be it reconnaissance drives into East Berlin before and after the Berlin Wall went up in August 1961, white-water canoe trips on the Delaware River in the 1970s, tiptoeing across the line onto North Korean territory at Panmunjom in 1983, or figuring out how to renovate the house that she insisted they should purchase here in Belfast when Dick was ready to retire from CIA. She described all of that and much more in her memoir, "One Woman's Journey in the Twentieth Century," published in 2002.

A Memorial Celebration will be held later. In lieu of flowers, the family requests that memorials be sent to a charity of the donor's choice.

Share Your Memory of
MaryAnn
Upload Your Memory View All Memories
Be the first to upload a memory!
Share A Memory