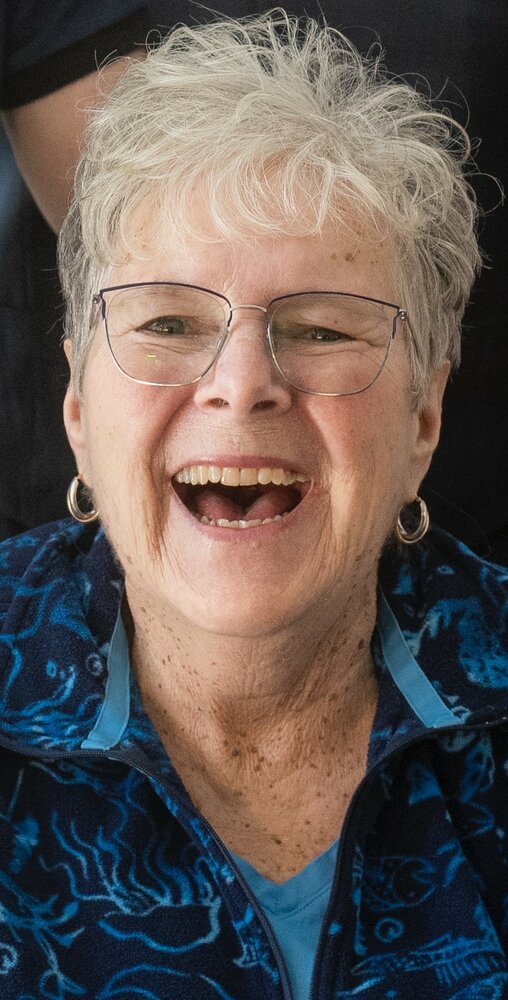 Please share a memory of Mary to include in a keepsake book for family and friends.
View Tribute Book

Mary Frances Weaver Dutch passed on to her next life following a short experience with liver cancer on Wednesday, June 29, 2022. As most know, Mary had a positive diagnosis of progressive Multiple Sclerosis in 1979, but continued to thrive throughout her adult life.

Mary was born in Gardiner, Maine on April 24, 1953. She was the daughter of Lewis E. (Gene) Weaver and Charlotte Donahue Weaver and moved to Belfast as a youngster with her siblings into the Donahue family home. Mary quickly merged herself into her grade school community joining Brownie and later Girl Scouts of America. The family was members of the Methodist Church and as an adult, Mary served on numerous communities in services to the church conference and the congregation. In a similar vein, she became a member of the Rainbow Girls under the guidance of her parents.

Mary continued to blossom as she entered Belfast Area High School. Along with being an excellent academic, she was a member of the band, chorus, enjoyed footlights and the stage very much, managed the softball team, and co-captained the cheerleading squad. Graduation in 1971 propelled her towards the University of Maine at Orono compass where she continued to distinguish herself through her educational experience. She was a member of the Alpha Chi Omega sorority, chosen as a Sophomore Eagle, and was always the “life of the party” in dorm-related social events.

Following graduation from UMO in 1975 with a degree in Business and Marketing, she was immediately hired by the Merrill Trust Co. in Bangor entering the marketing department as the first female hire by the bank into a management department. In her opening year with the bank, she was tasked to open new branch offices in Machias and Mars Hill. However, the manager of the marketing department took the credit for these accomplishments and as Mary saw little likelihood of advancement within the bank structure, she decided she had a better future as her own boss.

In the fall of 1976, Mary married Dr. Jeffery Jame Dutch, O.D. in returned to Belfast to reside and expand on what she had so wisely done during the UMO educational process. She had exposure to the real estate profession as her baker Dad also had a partnership in Chapman-Weaver Realty. Mary took a course as a sophomore at UMO allowing her to sit for a real estate salesperson’s license, and as a 19-year-old on summer break she brokered her first property sale. Now, exercising her independence Weaver Associates was established. The leadership skills and charming personality that started as a grade-schooler now came into play full force developing a sales staff that peaked at six and included Sue Brown, Sam Mitchell, Jan Weaver, and Fran Yeaton (you know her now as Fran Riley, designated broker of United Realty). Mary was asked to become a director on the Mid-Coast Board of Realtors, eventually elected as president of that board, which resulted in her being chosen for “Realtor of the Year” for the state of Maine in 1979. Along this professional journey and holding a Notary Public authority, Mary also executed many documents and officiated many weddings. As a member of the Belfast Chamber of Commerce, Mary was asked to apply her skill set to several committees of the city government such as the In Town Design and Review Committee. She also gave her time to serve on the Belfast Historical Society and Museum Board of Directors. The service to the community that made her most proud was taking the stand while serving on the “Corridor Committee” that has preserved the beauty and integrity that our city enjoys and flourishes with today to NOT allow a Big Box store to Belfast’s city limits.

It shouldn't be lost that along with the management of her own business and acting as CFO of her husband Jeff's optometric practice, she also ran a household and raised a daughter, Erin, guiding her development through primary and secondary schools and eventually gaining her own college degree.

Married life began on two legs and Mary started to play golf and curl with her husband Jeff. But as M.S. progressed the disability sidelined her for years from athletic competition; her cheerleading skills continued, however. But in the year 2000, Belfast Curling Club initiated a wheelchair curling program Mary was able to participate once again on the ice. The Belfast wheelchair curlers became the United States’ first competitive team to represent our country in the 2002 World Wheelchair Curling Championships in Sursee, Switzerland with Mary delivering the first stone ever for the U.S A.

She is survived by her husband Jeffery J. Dutch, her daughter, Erin Dutch Payson, husband Kyle Payson, and grandchildren Kayla and Kyle (K.J.). And by her brother and sister-in-law Michael and Ellie Weaver and sister and brother-in-law Vickie Weaver Otis and husband Richard. And she has been additionally loved by many aunts, uncles, nieces, and nephews and their offspring in both family trees and the many remembered extended family, especially those "Liberty Girls”.

The family thanks all who have brought smiles, some tears, and lots of love Mary's way with cards, flowers, and visits during the recent weeks. Additionally, to all the caregivers during her adult life with M.S., Dr. Delehanty, and in particular the recent trio of Betty Farris, Jodie Rolerson, and Darlene Bouchard who have provided personal care 7 days a week. In lieu of flowers, donations can be made in her name to the Belfast Methodist Church or the Belfast Historical Society and Museum.

Friends and family are invited for visiting hours from 4 to 6 pm on Friday, July 22, 2022, at Riposta Funeral Home 182 Waldo Ave. Belfast, a memorial service will follow on Saturday, July 23, 2022, at 11 am at Belfast United Methodist Church on 23 Mill Lane in Belfast after which a reception to celebrate her life will begin at 2 pm at the Waldo County Shrine Club 20 Northport Ave, Belfast.