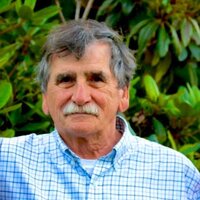 Robert was born in Dedham, Massachusetts on January 6, 1939 to Edmund Joseph Johnson Sr. and Anna (Brandalo) Johnson.  Robert attended Boston Latin School during which time he enlisted in the United States Navy Reserve. He graduated high school in 1957 and was discharged from the Navy in 1962.  Soon after Robert graduated from Boston College (1963) and began his teaching career in the Boston area. He married his wife of 60 years Betty I. Simons on November 24,1962.  Robert and Betty purchased their first home in Bellingham, MA and began raising their 6 children.

Robert and his family moved to Maine in 1980 where he taught for 20 years at Belfast Area High School (BAHS) as a foreign language teacher. During his tenure he also served as Chief Negotiator for the Teacher’s union supporting the rights of teachers in the district. During the summer months Robert was a foreman for Nash Blueberry Farm.  He retired from Belfast Area High School in 2000. He then worked full time for the Maine Education Association (MEA) in 2001, as a Uniserv Director.  After retiring from MEA in 2007, Robert took a short term teaching contract at Camden Hills Regional High School. Robert’s love for teaching never stopped and he could be found tutoring his grandchildren on various subjects, as well as teaching foreign language to friends.

Robert was a well loved teacher and great friend and colleague to many in the community. He  was known for his sense of humor, his fun teaching style, his strong advocacy for teachers and his overall caring personality. He had the best sense of humor and was often the jokester, having the gift of making people laugh.  Robert was always available to lend a helping hand to anyone in need. He was very welcoming and enjoyed conversation with anyone he met. His home was always open to anyone to stop by and sit at the kitchen table where he’d offer up a cup of coffee, something to eat and great conversation. He will be greatly missed by so many.

Robert enjoyed gardening and had a green thumb when it came to violets, cacti and aloe plants.  Robert was always the scholar, speaking several languages and loved learning new things.  He enjoyed reading, drawing, listening to music and doing the daily crossword puzzle. Robert’s greatest love was his family, and he enjoyed watching his children and grandchildren grow.  He would be present at sporting events, plays or anything involving his family and was their greatest supporter.

Funeral service will be held at Riposta Funeral Home on Saturday, January 28, 2023 at 10:30  a.m. for a brief gathering prior to service beginning promptly at 11:00 a.m. In lieu of flowers, donations can be made to the The ALS Association Northern New England Chapter at alsanne.org.

Memories and condolences may be shared with the family on his tribute wall.