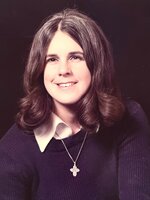 Patricia Ann Fowler, “Patti”, took her seat in heaven on September 11, 2022. She was born the eldest of three daughters on May 2, 1943, in Clinton, Iowa to Tomas Carter Jefferis and Louise (Linton). Patti, a proud, self-described ‘Army brat’, grew up in Japan, Panama, Maryland, California, and Texas and was a member of the Daughters of the American Revolution. She loved to tell stories of summers spent with her grandparents in Shadyside, Maryland shell-fishing and chasing chickens. In the summer of 1964, Patti married her high school sweetheart, Renn Fowler, then brought four children into the world to whom she gave her heart and soul. She was always involved in her children’s schools and baked chocolate chip cookies to sustain their teachers. She worked at St. Francis Episcopal Church in San Francisco and then with her sister at Bethesda Community School in Maryland, sharing her love with countless community friends and children. Not long thereafter, her seemingly favorite role began… grandma. She was grandma extraordinaire to her nine grandchildren.

In 1998, Patti and Renn moved to Belfast, Maine where she served as Secretary and volunteer at St. Francis of Assisi for several years. In San Francisco, Maryland, and Maine, Patti worked passionately with the Girl Scouts of America as Troop Leader and volunteer. Her children and grandchildren remember fondly the days of girl scout cookie boxes lining the walls of her home. Years ago, Alzheimer’s came into her life. She fought that battle with grace and dignity that is hard to comprehend. She never complained: only kept moving, giving, and loving while always rooting others on and lifting them up. She was truly a remarkable soul and will be greatly missed by all who knew her.

She is survived by her husband, Renn; children: RennDee (Chris), Alan (Wendy), Richie (Kim), and Hallie (Eric); grandchildren: Renna, Jack, Addie, Carter, Allison, Riley, Margot, Piper and Cooper; her sisters: Jill and Susan as well as many loving cousins and friends. In lieu of flowers, please consider a donation in her memory to The Massachusetts General Institute for Neurodegenerative Disease (MIND) (Make a Gift to Mass General) or the Girl Scouts of America (Donate | Girl Scouts).

A memorial mass will be held on Friday, September 16, 2022, at 1 pm at St. Francis of Assisi Court Street in Belfast, Me.