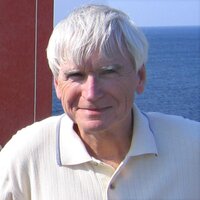 On April 9, 2022, George Leonard Siscoe died in Belfast, Maine, at the age of 84, after successfully living with lymphoma for nearly 13 years. He is survived by his wife, Nancy Crooker, his daughter, Karen Siscoe of Los Angeles, his stepdaughter, Melora Lynngood of Victoria, British Columbia, his grandchildren Kailey Fox and Christopher Levinger of Los Angeles, his step-grandchildren Athena and Demetrius Lynngood of Victoria, and his sister Sandra McDole of Wildwood, Florida. George Siscoe was born in Lansing, Michigan to Marguerite and Leonard Siscoe. He received his bachelor’s degree in 1960 and doctorate in1964, both in physics from the Massachusetts Institute of Technology. He was a Professor of Atmospheric Sciences at UCLA from 1968 until 1993. During his tenure as Chair, he saved that department from dissolution by establishing courses for non-science majors that attracted many students. He taught the first of such courses himself. To pique his students’ interest, he created striking demonstrations like fire rising in a whirlwind to illustrate scientific principles. He developed a course on art and meteorology which analyzed representations of atmospheric phenomena. His area of research was space physics (accomplishments listed in Wikipedia). In 1993, as a gift to his wife, he took early retirement from UCLA and became a Research Professor in the Department of Astronomy at Boston University. In addition to continuing his research there, he helped establish summer schools in space weather. He received Emeritus status in 2012. In the summer of 2008, George Siscoe opened the Old Professor’s Bookshop in Belfast, Maine. He used it as a platform to invite people to learn about the wonders of science and the breadth and depth of the humanities. He curated foundational books on most of the subjects one might find in any university catalog. He offered monthly Shop Talks featuring invited speakers on a wide array of subjects, with meetings of the Athenaeum the preceding evening in private homes, where people could interact with the speakers on an informal basis over wine and hors d’oeuvres. He established the Midcoast Exploration of Consciousness group, with monthly discussions, sometimes on cutting-edge research, which was of great interest to him. In all these activities he strove to give people confidence in their own scholarly efforts. George Siscoe was a scholar and a gentleman who will be sorely missed. In lieu of a memorial service, plans are being made to honor his request to hold a party in remembrance of him. https://waldo.villagesoup.com/2022/04/28/a-harvard-square-book-shop-in-belfast-maine/ Memories and condolences may be shared with the family at www.ripostafh.com