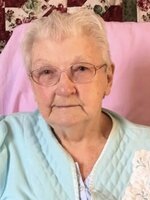 Dorothea O. Dority passed away at Harbor Hill in Belfast, Maine on January 25, 2022, after a long illness. She was born in North Waldoboro, Maine on March 26, 1930 to Edith Emerson and Merrill Orff Sr. She attended the one room school house in Washington, Maine. Dorothea married Arthur R. Dority Sr. of Camden in July, 1948. They had six children. Rosalie Annis Davis of Searsmont, Christine Bowen and husband, Bob of Sevierville, TN, Gloria Blakeley and husband, Brian of Mooresville, NC, Daughter, Sherry Dority of Putnam, CT. She was predeceased by her daughter Jean Blain of Manchester, CT. on January 5, 2019 and son Arthur R. Dority Jr of Plainfield, CT on March 8, 2012 and son-in-law Joseph P. Davis on September 6, 2001. She was also predeceased by her husband Arthur R. Dority Sr., Brother Merril Orff Jr. and wife Joann of Union, brother Russell Orff of Weatherford, TX, brother-in-law Norman Ahlholm of Warren, sister Bertha Wood of Florida, sister-in-law Alice Luce Orff of Thorndike, and a very special friend, Melvin Wadsworth of Searsmont who predeceased her on December 25, 2021. Dorothea is survived by sisters, Maxine Ahlholm of Warren and Lois Williams of Jefferson and brother, Donald Orff of Thorndike and sister-in-law Offa Orff of Weatherford, TX. Grandchildren, Scott Annis and wife Dawn of Littleton, Co, Joe Davis and partner, Courtney Billings of Searsmont, Nicole Davis Karod and husband, Tom of Bath, Paul Stilkey and partner, Kaylin Billings of Searsport, Allen Stilkey and wife Kelly of Pawtucket, RI, Jarica Golino of Vernon, CT, Brittany Covill and husband, Joe of Manchester, CT. Victoria Blakeley of Mooresville, NC, Raymond Dority and wife Christina of Coolidge, Arizona, Evan Dority of Bennington, Vermont and Andrea Garrett of Windsor, CT and son-in-law Paul Blain of Manchester, CT. She is also survived by 14 Great Grandchildren and 3 Great, Great Grandchildren, known to them as "GG" and numerous neices and nephews. "Dot" was a very hard worker all her life, working outside of her home and maintaining her gardens, both vegetable and flowers, being rewarded with the bounty of vegetables which she canned and froze into her 80's and her beautiful flowers. In the late 60's they moved to Connecticut where she lived for 25 yrs, moving back to Maine, next to her daughter, Rose, where she enjoyed her flowers and a small veggie garden the last 30 years of her life. She reconnected with an old school chum who had lost his spouse and together they enjoyed the later years of their lives, going to dances most Saturday nights and enjoying Maine Country Music events throughout Maine. She often said Maine had as good if not better talent than Nashville. Melvin and Dot are reunited once again having their four o'clock coctail. RIP. No services are planned at this time. The family will get together sometime this summer for a memorial service.