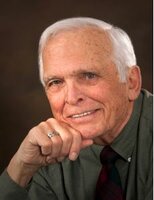 James H. Stone II BELFAST – James H. Stone II died November 20, 2021. He was born in Syracuse, NY in 1933 to Martin Helfer and Louise Stone Helfer. He received his bachelor’s degree from Dartmouth College where he achieved the coveted status of Senior Fellow, and received his PhD from Princeton University. He served honorably in the US Army during the Korean Conflict in an artillery unit stationed near Schwäbisch Gmünd, Germany. He married Vilma Steeb, an artist, from Schwäbisch Gemünd and the couple raised 4 children before their divorce. At the time of his divorce, he changed his name from James S. Helfer to James H. Stone II to honor his grandfather, a dairy farmer in Marcellus, NY for whom Jim worked from age 9 to 18. He began his academic career as a professor at Oberlin College and then spent over 30 years as a professor at Wesleyan University. In 1982, he married Laurie Cleghorn, also a professor. For two years in the 1970’s, he was director of the Wisconsin University Program in India. In 1989, he helped found Miyazaki International College in Miyazaki, Japan where he taught until 1996. As a well as being a professor of Asian philosophies and religions, he was also a practitioner of Rinzai Sect Zen Buddhism. After retiring from teaching, he became Maine’s only parking enforcement officer with a PhD, working for Castine where he lived for 17 years. He was president of the Castine Historical and the Penobscot Historical Societies for a few terms at each. Jim did the research for and organized the installation of the permanent Penobscot Exhibition at the Castine Historical Society in collaboration with Frank Hatch. He spent his retired years doing volunteer work for various groups and projects. He is survived by his second wife of almost 40 years, Laurie; his sons Antony Helfer (Gabi) of Germany, Philip Helfer of California, and his daughter Cassandra Lishman (Nigel) of Wales; his stepson Mark Pisch of Florida; 7 grandchildren – Jonah Helfer of Germany, Edward, David, and Beatrice Lishman of Wales, Lacie Helfer of Maine, Adrienne Weston (Jeffery) of Maryland, and Evelyn Pisch of Maine. He is also survived by his mother-in-law, Betty Cleghorn of Maine. He was predeceased by his 4 brothers, and his son, Christopher Helfer. The family will celebrate his life privately as he requested. Donations in his memory may be made to the Maine Coast Heritage Trust, 1 Bowdoin Mill Island, Suite 201, Topsham, ME 04086, or a charity of one’s preference.