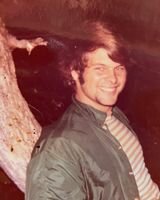 ROCKPORT - William (Bill) Carpenter Bisbee, 71, passed away unexpectedly at his home in Rockport, Maine, with his wife, Elaine, by his side. A good and wonderful man, Bill leaves an indelible mark of giving and love on his family and his community. Bill was the second son of the late Spaulding (Joe) and Carol Bisbee of Belfast, Maine. He was born in Waterville, Maine, on February 14, 1950, a very welcome Valentine for his family. He spent his childhood in Belfast, where he first demonstrated his natural inclination to serve and ability to lead. As a youth he was active in Boy Scouts, attaining the rank of a Life Scout, and in the Youth Fellowship of the First Church of Belfast. During his years at Belfast Area High School he earned highest honors academically, captained the first BAHS champion football team in 1967, and lent his strong bass voice to the chorus and drama performances. After graduation, Bill was thrilled to have the opportunity to attend and graduate from Dartmouth College with a degree in biology, and later Yale University in its Physician Associate Program. He found his true calling in the medical profession, where he excelled for four decades in his clinical and surgical work and gave his heart to patient care. Through his association with the orthopedic practices at both Mayo Regional Hospital in Dover-Foxcroft, and Pen Bay Medical Center in Rockport, he became a highly respected and beloved member of the medical community. He was also an active member and leader in the Maine Association of Physician Assistants. Bill and Elaine raised their three remarkable daughters in Dover-Foxcroft, where they all thrived. He was very active in the community, spending time on the local school board and giving 10 years of service to the Foxcroft Academy Board of Trustees. He was a member of the Dover-Foxcroft Congregational Church, serving as deacon and as a member of both the vocal choir and handbell choir. While Bill accomplished much in his work and community life, he would say that his greatest accomplishment was his family. Bill’s devotion to family was his highest priority. He loved, admired, and supported his wife of 47 years, Elaine, and his daughters, Kristen, Bryanne, and Dana unconditionally. That love only grew stronger when he became “Poppy” to his precious grandchildren. His strength, compassion, and good humor were boundless. Everyone he touched was better and happier for it. Bill is survived by his wife, Elaine Simard Bisbee, his daughters, Kristen Santoro and her husband, Frederic Jr, of Norwell, MA, Bryanne Bisbee and her husband, Saul Vydas, of Trenton, ME and Dana Bisbee and her husband, Tom Ringle, of Gray, ME, and his beloved grandchildren, Eric, Lily, Eleanor, and Magnus, He is also survived by his siblings and their spouses, Spaulding III and his wife Kandy Bisbee, George Dana Bisbee and his wife, Pam Murphy, and Katherine Bisbee Eldridge and her husband, Scott as well as many nieces, nephews, cousins and countless friends. A memorial service will be held in Bill’s honor at 2PM on Saturday, December 4, 2021, at the First Church of Belfast, 8 Court Street in Belfast. A Celebration of Life will be held in Dover-Foxcroft in Summer 2022 with date and time to be determined. In lieu of flowers, memorial scholarships will be set up in Bill’s name. Contributions may be made to the Dover-Foxcroft Congregational Church, P.O. Box 328, Dover-Foxcroft, Maine 04426 and/or to Foxcroft Academy, 975 West Main Street, Dover-Foxcroft, Maine 04426. These scholarships will be for those pursuing a career in the medical/health care fields.