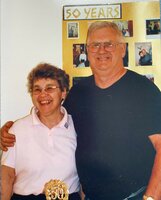 Donna Lea (Suitor) Bradford Donna Lea Suitor, 81 of Belfast, passed away peacefully at her home on Tuesday, October 12, 2021. She was born in Knox on October 3rd, 1940, the daughter of Fred Suitor and Elva Murphy. She grew up with her mother and attended several different schools in Waldo County as well as spending a short time in Massachusetts. Donna returned to Waldo County where she later married the love of her life of 64 years, Alton “Bud” Bradford, and they settled in Belfast. Donna once mentioned that she never attended the same school for a whole school year and was proud to be able to purchase a home in Belfast with Bud in 1962 to give her children a stable home. There was nothing more important to her than home and family and her dear girlfriends. She was exceptionally proud of each of her children and grandchildren and would brag about them at every opportunity. One of her most treasured compliments was how well kept and tidy her young children were. Donna was well known for her cooking and was always happy (and quite insistent) on feeding anyone who stopped in. Donna was incredibly proud of being a stay at home wife and mother while her children were young and of her 20 years of service as a cook at Belfast Area High School. Donna enjoyed country music greatly, and in their younger days, Bud and Donna were members of the Chicken Wheelers, a square dance group in Belfast. She enjoyed learning and took sewing lessons, a cake decorating class, and despite her intense fear of the water, took swimming lessons as an adult to learn to swim and overcome her fear. She loved Bud’s weekend mystery rides and visiting family, attending her grandchildren’s events and her girlfriend get togethers. She welcomed anyone and everyone unconditionally. Donna was predeceased by her parents, her brothers Dale Suitor and Merlon Gibbs, and sister Eleanor Degraff. She is survived by her devoted and loving husband and their 5 children; Brenda Bradford, Wayne Bradford and his wife, Renee, Randy Bradford and his partner Elena Sobey, Jeff Bradford and his wife, Chris, and Alison Felton and her partner, Tim Downer. Donna was the proud grandmother of 11 cherished grandchildren: Haley Goff, Silas Ratten, Beth Bradford, Jason Bradford, Chelsea Bradford and Hayden Bradford, Chad, Kyle, and Nicole Bradford, and Brody and Logan Curtis and 7 great grandchildren: Charlotte, Ellery, Iris, Archer, Carter, Emma and Noah. Donna is also survived by her sisters, Sandra Smith and Lucy Holt, as well as several cousins, and many nieces and nephews. Mary Benjamin was Donna’s longest and dearest friend, their friendship spanning over 60 years. Other special friends include Judy Gaul, Maxine Curtis and Grace Dodge and many more. They spent many precious times together having tea, laughing, celebrating birthdays, participating in charity walks, walking the track at the Y, and just having fun. The family would like to express their deep gratitude to Waldo County Home Health, Waldo County Hospice and the staff at the Sussman House, whose help and assistance allowed Dad to care for Mom at home, her most favorite place. Due to concerns regarding Covid, a small graveside gathering for immediate family will be held on Thursday, October 21, at 10:30am at Kinney’s cemetery in Brooks. In lieu of flowers, donations can be made in Donna’s memory to Waldo County Hospice, Belfast, Maine.