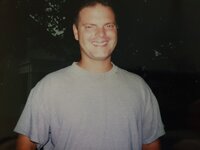 Michael Joseph Saitto, 52, of Belfast, ME, passed away on September 25, 2021 at his family home. He is now at peace after years of suffering with multiple disabilities and chronic pain. Michael was born in Boston, MA on September 1, 1969. He graduated from Dorchester High School in Dorchester, MA, in 1987 and went on to serve in the United States Army, stationed at Fort Hood, TX. He returned to Boston where he worked at RS Express Inc. before settling in Belfast, ME where he worked with Lane Construction for many years. He was an avid reader of science fiction and enjoyed anything that could fly. He pursued his dream of flying himself and completed his solo flight, earning his shirt-tail cutting. He cared deeply for animals and spent time observing the wildlife outside his home. Michael is survived by his mother, Coradean (Baker) Lavergne of Belfast, ME, his former wife Julie Saitto, step daughters Carmen Lord and Chelsea French, sisters Michele Saitto and Monique Lavergne Morgan, his brother at heart Joseph Fitzpatrick, two nieces, two nephews, two aunts, an uncle and five cousins. He is preceded in death by his step father, Charles Lavergne. A Celebration of Life and burial will be held at a later date.