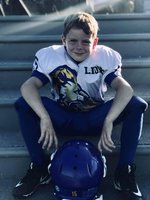 Our precious little boy, Bryan Lee William Totman, beloved son of Ryan & Nikki Totman, died tragically on Monday, July 19, 2021, at Waldo County General Hospital. Born on July 31, 2011, he was twelve short days away from his 10th birthday. Bryan attended Ames Elementary School in Searsmont where he took great joy in playing football, wrestling, and karate. He was known by his family and friends to be the best hugger ever. He loved very deeply and was quick to notice when someone needed a hug or comforting. A beautiful little boy, with his impish grin and quick wit, he could charm anyone. A charm that his grandparents couldn’t resist, like when he’d ask for another Xbox card so he could conquer the next video game. He was incredibly intelligent, thought deeply, and was always full of facts. Facts that had you questioning it enough to look it up, such as how many miles to a planet, to which he would be accurate. He picked up on everything and remembered it. He was delighted to share a special relationship with his Great Nana and Grampy John, who he would talk to about his academics and his endeavors. He was excited to tell them about his newest adventure of going to Space Camp. He was amazingly gentle with his little sister and younger cousins yet could be one of the most energetic little boys with a wild spirit. Bryan is also remembered for his love of hot dogs. Recently, he went to Wiscasset Raceway where his Mom got him two hot dogs, but he wanted more, so she got him another two. Still wanting more, his “Nene” ended up sneaking in one more hot dog for a total of five hot dogs. Bryan was looking forward to a trip to Funtown to celebrate his upcoming birthday. He was also looking forward to turning 10 as that meant he would be old enough to drive with his Dad on his Dad’s land. A task he was envious of when watching his older sister do the same. An active and loving boy he could also be found playing with remote control cars, enjoying the swimming pool, playing video games, horsing around with his sisters or just chilling with his family watching a movie. For one whose light disappeared far before his time, Bryan touched the lives of so many. Our cherished boy could light up any room with his infectious smile. He was the apple of our eye, the star of our hearts, and leaves us smiling through our tears. He will be sorrowfully missed by all that knew him. Bryan was predeceased by his great grandmother Kathryn Dinsmore, great grandfather Robert Philbrook and great aunt Cathy Davidson. He leaves behind a large family – his father Ryan Totman and step-mom Clarissa Wetmore of Searsmont; his mother Nikki Totman of Lincolnville; sister Jazzy Totman; sister Austin Honnell; step-sister Lorelei Wetmore; maternal grandparents Jamie & Hal Leathers of Lincolnville and Walter & Kathy Philbrook of St. George; paternal grandparents Susan & Brian Totman of Searsmont; great grandparents Mary & John Goulet; as well as several aunts, uncles and cousins. A time of visitation was be held for family and friends on Saturday, July 24, 2021, from 3 to 5 pm at Riposta Funeral Home 182 Waldo Ave, Belfast, ME 04915. Interment will be held on Saturday, August 21, 2021, at 1 pm at Oak Grove Cemetery in Searsmont. Memories and condolences may be shared with the family at www.ripostafh.