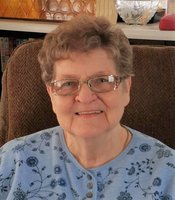 Patricia A. (Burgess) Melvin, formerly Patricia A. Furlong, age 86, died peacefully at Waldo County General Hospital, surrounded by her children on July 15, 2021. She answered to Pat and in her younger years "Patsy", was born in Bangor, the daughter of Peter Burgess and June (Sanborn) Burgess, and was raised in Newburgh along with her four siblings. Pat attended Hampden High School and later owned and operated Pat's Cafe in Bangor for a number of years. Pat loved her family. As a young woman, she took it upon herself to learn sign language because she had a family member as well as two friends who were hearing impaired. Pat broke down the barrier and opened communication between the hearing and non-hearing worlds, often acting as their translator. She looked forward to family dinners (especially lobster), was skilled at playing Cribbage and Scat. More often you might find her playing Yahtzee or putting together a puzzle. She rarely missed a televised Red Sox game and was an avid reader who enjoyed passing books read, on to her friends. Pat had a wonderful spirit and was quick with a joke. She took great satisfaction in taking the time to put a smile on someone's face or make them laugh. Whenever asked "How are you?" she would simply reply "fat and sassy". She was preceded in death by her parents Peter and June Burgess, two brothers, Albert and Harold Burgess, one sister Jeanette Williams, and two nephews, Myron Rittlinger and Keith Burgess. Pat is survived by her two children; son Robert P. Furlong and wife Patricia of Uncasville, CT; daughter Sheryll L. Small and husband Daniel Jr, of Northport; her sister Pauline Rittlinger and husband Richard of Wichita, KS; granddaughters Laura A. Small of Northport and Christina Angulo her husband Olan and great-grandson Liam of North Franklin, CT; grandson Stephen (Furlong) Wallace and husband Sam of Westerly, RI; niece Valarie (Rittlinger) Setna and husband Pervez and their children Courtney, Mattingly, Andrew, and Isabelle of CA; her nephews, Stephen Burgess and wife Rena of Newburgh, Wayne Bagen and wife Betty, and their children, Brian, Brad, Barbie, and Brenda, of Flower Mound, TX, Rodney Bagen and wife Mari Tess of Alexandria, VA, Brent Burgess, and wife Barbara and their children Peter, Paul, Katie, and Daniel of Newburgh, Jay Star Williams of VA, Charles O'Brien Rittlinger and wife Mary and their children Adam and Allison of Wichita, KS; great-niece, Patricia Rittlinger of Magnolia, TX. Per Pat's wishes, there will be no funeral services. A private committal service will be held for Pat's family to be set at a later date. In memory of Pat's sassy spirit, smile more, giggle more, and relish the time spent with family and friends. Memories and condolences may be shared with the family at www.ripostafh.com