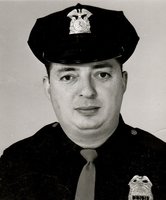 MONROE – Joseph A. LaMagna, Jr, of Monroe passed peacefully at his home on July 15th 2021. He was born in Brooklyn NY, Jan. 8, 1934, the youngest of five children of Joseph A. Sr and Jennie V. LaMagna. Joseph grew up in Brooklyn, N.Y., where he graduated from St. Francis Preparatory School in Queens in 1952. After graduation, he was drafted into the U.S. Army where he served as a Corporal in the Infantry from 1952-1954 during the Korean War Conflict. Upon his discharge from the service, Joseph was employed as a financial records clerk at Sinclair Oil in New York City. In June 1958, Joseph married the love of his life, Mary, whom he had fallen in love with from the age of two. He insisted throughout his life that she made him an offer he couldn't refuse by threatening him into marriage. They moved to Long Island, N.Y., where they raised their three children. In January 1960, Joseph joined the Nassau County Police Department, Badge 159, which he served for twenty years before retiring as a Detective Sergeant in January 1980. He was renowned throughout the Department for his investigative prowess as an undercover cop and was in demand by law enforcement agencies across the country for his lectures on organized crime. After retiring from the police force, Joseph worked as a Corporate Security Special Investigator for SCM Corporation in the heart of downtown NYC. His office overlooked the famous Waldorf Astoria hotel. When SCM dissolved in 1986, Joseph formed his own security and private investigation company, LaMagna Associates, Inc. until his move to Monroe, Maine in 1989. From 1989 until present, Joseph has resided in Monroe, Maine on the land he so deeply treasured and a place to which he felt particularly called. He served the people of Monroe on the Board of Selectmen and accomplished much for the town, including establishment of a town park and the local post office. Always an innate investigator, Joseph formed Nova Investigations which he successfully owned and managed from 1992 until July 2014. Joseph also served as Bail Commissioner for Waldo County for a number of years. Joseph was a member of the National Rifle Association (Life), a member of Anah Shriners in Bangor, a former Master Mason and a 61-year member of the Nassau County Long Island New York Police Benevolent Association and Retired Police Association of the State of New York. Joseph was preceded in death by his beloved wife of 56 years Mary, parents Joseph & Jennie LaMagna Sr, and siblings Annette, Bernard and Gigi. Joseph is survived by his children: daughter, Maria and husband, Bob, grandchildren, Mary, Robert (Amanda), Stephen, Joseph (Jamiane) and Jennifer (Matthew), great-granddaughter Olivia; daughter, Camille and husband, Mark, grandchildren, Arthur, Jennie and Alexandra; and son, Joseph and wife, Betsy, grandchildren, Jay and Alex. Joseph is also survived by his sister, Mary Tornabene of Daytona Beach, FL and many nieces and nephews. A Mass of Christian Burial will be 2 pm on Friday July 23, 2021 at St. Francis of Assisi Church, 81 Court St., Belfast. Private burial will take place in the Maine Veteran's Memorial Cemetery.