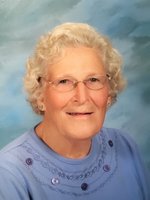 BELFAST MARGARET B. CUNNINGHAM, 103, passed away July 11, 2021 in Belfast. She was born in Swanville on April 21, 1918 to Walter and Dorothy (Nickerson) Beal of Swanville. Margaret started studying at Gorham Normal School in southern Maine to become a teacher. When she was getting ready to go back for her second year, a local school superintendent begged her to take a job teaching at the one-room schoolhouse in East Thorndike. Money was tight so she accepted the job. There she taught 20 students from kindergarten through eighth grade - some as old as she was, and bigger too, by herself. She hauled water, stoked the fire, and boarded with a local family. The next year she taught in Swanville so she could live with her parents. There she met her husband, Devereux. They married in March and had five children including one who died as a toddler. During World War II, Devereux supported the war effort by loading ammunition in Searsport and also hauling box boards in Patten that would be used to make coffins for soldiers who died overseas. After the war, they moved to Swanville and built a home on land from Margaret's parents. They worked the next years raising a family and improving the house they had built. Margaret was teaching in the Belfast school district during the 40s through the 70s while attending college classes until 1961 when she received her degree from University of Maine. This was a crowning achievement for Margaret because the district had to double her salary for the degree. She retired from teaching in 1973. They began six months wintering in Florida and six months in Maine. They enjoyed camping and visiting friends and family. After Devereux's passing in 2006, Margaret continued the Florida winters until it became too much for her. She chose to spend her remaining years in Belfast tending her flowers, her garden and making jams and jellies. She was able to continue living independently, driving and making her delicious jams. It can be said she led a long and fruitful life. She was preceded in death by her husband of 66 years, Devereux in 2006, her son Donald in 1946 and her granddaughter, Judy Black in 1993. Margaret is survived by her children, Jeanne Hibbard and husband Edward of Tacoma, WA, James Cunningham and wife Faye of Searsport, Dorothy Black Field and husband Frank of Northport, David Cunningham and wife Barbara of Portland, Oregon; ten grandchildren: Andrew Hibbard, David Hibbard, Ricky Black, Angela Black Garard, Jennifer Black Parrott, Jamia Cunningham Korth, Jeffery Cunningham, Jill Cunningham, Amy Cunningham Freeman; 9 great-grandchildren: Samantha Hibbard, Ella Hibbard, Justin Smith, Austin McDevitt, Brooke Pinkham, Zachary Ziobron, Vincent Garad, Alex Parrott, Nicholas Bailey; three great-great-grandchildren Madyson and Macy Pinkham, Baby Ziobron. Graveside services will be held at a later date. Those who wish may make donations in Margaret's memory to Cornerspring Montessori School Building Fund, 256 Congress Street, Belfast, ME 04915.