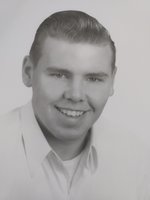 James G. Hatch Sr, 90 of Belfast, beloved father, brother, uncle, grandfather and great grandfather, passed away on May 29, 2021 at Bayview Manor Assisted Living Facility. He was born February 6, 1931 in Belfast to Howard H. Hatch and Thelma (Clement) Hatch. He was a graduate of Crosby High School, class of 1949. In the fall of 1950 James Married Elizabeth (Teague) Hatch and together they raised four children in the same Head of the Tide neighborhood where he was raised. James provided for his family as a logger up to and including the years he and Elizabeth worked side by side as owners of The Yankee Clipper Motel. He was a member of both the Anah Temple Shrine Club and the Belfast Lions Club. His fondness for socializing garnered him many friendships over his lifetime. James was predeceased by his parents; his sister and brother in law, Norma (Hatch) Dutch and Dryden C. Dutch; niece Julie (Dutch ) Marriner and nephew Larry B. Dutch, and RoAnn Blood. The mother of his children, Elizabeth Hatch and many cherished friends. He is survived by the four children, James G. Hatch Jr., Lauren Hatch, Thelma (Hatch) Nelligan and her husband Thomas, Heidi (Hatch) McFadden and her husband Michael; seven grandchildren, Megan Hatch Rinko , Matthew Hatch, Lilah, Caitlin and Michael McFadden, Lexi and Ambrosia Nelligan. He is survived by three great grandchildren, Ethan, Noni, and Gemma; special nephews Michael Marriner, Jeffrey Dutch and his wife Mary, as well as several great nieces and nephews. The family wishes to extend sincere gratitude to the staff of Bayview for their compassionate care, especially during the long year of COVID. Also,2 we wish to say a special thank you to the staff of Kindred Hospice for their TLC and support. A memorial gathering is planned for 2 Pm at Riposta Funeral Home in Belfast on Sunday, June 6th 2021. In lieu of flowers, given their dad's profession, the family suggests planting a tree in his memory.