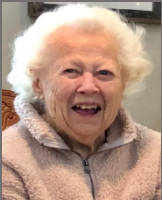 The strength of my mother wasn’t something you could always see on the outside.  However, the effects of her unwavering loyalty, dedication, perseverance, and humor are deeply ingrained in each of her children; shaping who we are and keeping her alive within us. Virginia Hudgins Barnard Sawyer, 91, of Rockland passed away on April 9, 2021 in Rockport. She was born in Rockland Maine on July 25, 1929 to Margaret Mayo Gay Barnard and Clarence Edward Barnard.  She was the baby of a beautiful blended family which included siblings Edward Barnard, Walter Gay (wife Winona), Alice Gay Spear (husband Philip Spear), Eleanor Barnard Glover (husband Kent Glover), Richard Barnard (wife Mabel), Leigh Barnard (wife Ida).  Her siblings were simultaneously protectors, pranksters, and confidants.  Her parents and siblings all passed before her. Virginia (“Ginny”) grew up on Chestnut Street in Rockland Maine and graduated in 1947 from Rockland High School where she was an avid sports fan and member of the bowling team.  Her bowling stories from high school and beyond are legendary as is her collection of high score patches and pins. In Rockland, she attended many local dances and met her future husband Maurice Edward Sawyer, (a Coast Guardsman from Chesapeake Virginia) at a dance in Rockland circa 1951.  He was a young man from Virginia who swept her off her feet, married her and whisked her away to a life in a small southern town.  They were married on December 15th, 1953.   Ginny and Maurice had three children: Cynthia Clare Sawyer (husband Norman Davis deceased), Sam Sawyer, and Cathy Sawyer Foley (husband Kevin Foley).  Ginny coached softball, sewed cheer uniforms, and was team mom for countless activities.  She never missed a sports game for one of her kids and was a kind neighbor, and friend to all.  Her door was always open, and over the years, there were many beloved cats and dogs who also found their way through that door. Through the years, Ginny continued bowling in local leagues at the Indian River Bowling Alley, she also enjoyed playing cards with ladies’ groups and couples on Saturday nights.  Her competitive nature showed itself discreetly in these games and when she was coaching girls’ softball on the B.M. Williams Elementary softball fields, but she always played to win.  She also loved to watch and cheer for the Washington Redskins.  She never missed a birthday, holiday, or other opportunity to host our extended family during the holidays and cookouts in the summer. Those were the days!   She returned to her roots, moving back to Maine in September of 1999, and spent the last 22 years living quietly overlooking Damariscotta Lake or later in Belfast and finally Camden.  Unsurprisingly, she reconnected with her high school classmates and a small group of them (all in their late 80’s & early 90’s) met weekly for lunch and to play cards.  She learned a lot of new card games and loved to laugh and visit with her old friends.   “Grammy” to her three grandsons, nothing made her prouder than her boys:  Connor Michael Foley, Aidan Sawyer Foley, and Owen Smith Foley.  She flew to California for the birth of her first grandchild and was there for each of them when they were born and as they grew, providing the unique love only a grandmother can give.   At the age of 91, Ginny had a progressive form of dementia but overall good health and spirits.  She maintained her wry sense of humor until the end, chatting with and joking with anyone lucky enough to cross her path.  She died unexpectedly on Friday, April 9th at Pen Bay Medical Center after a fall.  She is survived by her three children, her son-in-law, three grandchildren, nieces and nephews and a few wonderful classmates from Rockland High Class of 1947! A graveside service will be held on June 12th at 10:00am for our mother and father who will be reunited in internment at the Achorn Cemetery in Rockland Maine.  In lieu of flowers, please consider a donation to Beacon Hospice, 1026 Stillwater Avenue, Bangor, Maine 04401.  Hospice angels are like no other. Arrangements are under the care of Riposta Funeral Home Belfast. Memories and condolences may be shared with the family at www.ripostafh.com In all the world there is no heart for me like yours.  In all the world there is no love for you like mine.-Maya Angelou