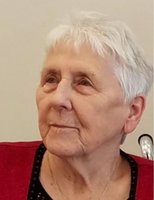 JOYCE M. BUNKER, 87, formerly of Belfast and Freedom, passed away on April 2, 2021 at Maine Veterans Home in Augusta.  Joyce was born December 6, 1933 in Monroe, Maine to Jasper G. and Mildred V. (Smith) Curtis.  Joyce was a 1952 graduate of Monroe High School.  She married Paul M. Bunker on October 14, 1954.  They made their home in Freedom, Maine where they raised four children.  She worked at several local businesses which included Monmouth Canning Company,  Jim's Ready Peel, Penobscot Frozen Foods.  She also volunteered at Freedom Headstart and Belfast Headstart.Joyce and her twin sister, Janice, also belonged to the Twins Club.  She was a very caring person putting everyone else's needs before her own.  Joyce was devoted to her whole family.  Her doors were always open to the neighborhood kids.  She had a passion for music and dancing with her twin sister, Janice, and older sister, Evelyn.  Her grandchildren were the light of her life, and she spent many hours with each of them.  In her later years, she frequented with a group of friends at the local McDonalds where they were known to play a few games of Bingo.  Joyce loved picking berries and fruit that she would later make into pies and pastries.  She was also known for baking her famous biscuits. She was predeceased by her husband Paul Bunker; granddaughter Heather Lappin; her brothers Albert Curtis  and Ernest McKague; her sisters Arline Porter, Evelyn Porter and her twin Janice Emerson; son-in-law Peter Soule.  Joyce is survived by her children, Paula Bourassa and husband John of Waldo, Blaine Bunker and wife Donna ofAlbion;  David Bunker and wife Jane of Morrill; Myrna Soule and companion  Al Robbins of Union;  sister-in-law Brenda Pooler.  She is also survived by her grandchildren, Tracy, Eric, Jody, Lori, David II, Jennifer, Adam, Craig, Kassi, Sandy and Kurt; 21 great-grandchildren; several nieces, nephews and cousins and many friends. A celebration of life will be held at Freedom Church  from 1-3 p.m. on April 18, 2021.   In lieu of flowers those who wish may make donations to Alzheimer's or Cystic Fibrosis Foundations.   A private burial will be at Bunker Memorial Cemetery with Joyce's grand-daughter-in-law, Pastor April Turner, officiating in the spring.  Memories and condolences may be shared with the family at www.ripostafh.com