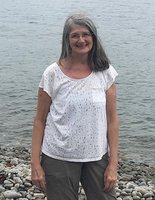 Priscilla Ann (Batson) Wentworth died peacefully on March 29, 2021 at home, in Searsport, Maine with her husband and their two daughters by her side. She was born May 30, 1952 to Mary Elizabeth (Bates) and Donald Edward Batson in Lynn, Massachusetts. The family spent most of her childhood in Georgetown, Massachusetts where she and her three siblings attended school. In 1970, Priscilla moved to Maine to attend the University of Southern Maine (Gorham State College at that time). After earning her bachelor’s degree in art education, she moved to Searsport and began her career as an art teacher in the local elementary school. That was also the year she met her lifetime companion, David L. Wentworth. They were married in 1976 and made their home in North Searsport. Priscilla put her teaching career on pause for several years to stay home with their two daughters, Brooke and Libby. She then went on to serve as the Camden/Rockport Elementary art teacher for the remainder of her teaching career and in all, taught for 25 years before retiring at age 54. Former students and colleagues often remark about Mrs. Wentworth being a favorite teacher and making a lasting imprint on their lives. Priscilla thrived on creating art from a very young age and continued to pursue that passion throughout her entire life. Tie-dying, sewing, printmaking, photography, sculpting, quilting, painting, drawing, and display building are just a few of the things Priscilla taught and/or practiced in her lifetime. In addition to her teaching career, Priscilla also had a keen business sense and was a founding member of two craft co-ops, one in Searsport, and another in Pemaquid. It was 1993 when she began working with polymer clay, creating jewelry and other decorative objects by rolling, shaping, arranging and slicing layers of mixed colors. This continued to be her medium of choice, and her business, PatchWork Clay continued to prosper through her final days. An excerpt from Priscilla’s Etsy page perfectly captures her spirit, “When I'm not creating, I'm often thinking about it. I might at the same time be outdoors hiking the beach, a woods trail, a mountain, or, if I'm desperate, the roadside. Snowshoes in winter, or a kayak in summer get me to some out-of-the-way places where I find plenty of quiet and inspiration here on the beautiful Maine coast. I often return to the studio after a few hours of exercise with a new idea or solution to try.” In 2011, Priscilla became “Grammie” and having retired from her teaching job by that time, she was able to fully enjoy this new role. Forever young at heart, she instilled the spirit of creativity and relished in playtime with her two grandsons who will always show reflections of Grammie’s beauty. Priscilla was predeceased by her parents, Donald and Mary; her sister, Ruth Weston; and her father-in-law, Lloyd Wentworth. She is survived by her husband, David; her daughter Brooke Sisk, son-in-law Randy Sisk, and grand-dog, Bella; her daughter Libby Dimond, son-in-law Justin Dimond, and grandsons Mason and Nashua Dimond. She is also survived by her sister and brother-in-law, Janet and Stephen Lyons; brother and sister-in-law, David and Val Batson; brother-in-law, Peter Weston; mother-in-law, June Wentworth; sister and brother-in-law Deborah and Blaine Horne; brother and sister-in-law Douglas and Candy Wentworth; nieces, nephews and many dear friends. In lieu of flowers, donations can be made to Friends of Sears Island (site linked below). Sears Island was a special place for Priscilla and is one where her adventurous spirit will always be remembered. A celebration of life will take place in the summer of 2021. https://friendsofsearsisland.org.