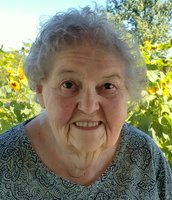 TROY -- Barbara Piper, 91, of Troy, Maine, passed away peacefully Thursday, Jan. 7, 2021, at Northern Light Continuing Care Lakewood in Waterville. She was born in Madison, Maine, to Walter and Inez Rowell. The youngest of 10 children, she grew up in a large family full of love and music. She graduated as valedictorian of her class and worked at a bank in East Madison. She met the love of her life at the Skowhegan State Fair, a Navy man named Erwin Piper. They were married in 1948 on her parents’ farm. They settled in Troy, established their own dairy farm, raised a family of five and were married for 57 years until his death in 2006. In the early 1980s, Barbara and Erwin began traveling to attend World War II reunions for Erwin’s ship, USS LST-616. After selling the dairy herd, they extended the length of each trek as they made many side trips to visit family, friends and shipmates. They thoroughly enjoyed their time on the road, exploring the country in their truck camper. Family meant a lot to Barbara. That big farm kitchen was the site of many cherished holiday celebrations, family reunions and friends just dropping by. She was the center of the family, cooking many meals served at the long kitchen table while also running a dairy farm. In her “spare” time in those days, she was a member of the Troy Ladies Auxiliary and served on the B.B. Cook Clubhouse Committee. Local organizations could always count on a batch of Barbara’s baked goods for community suppers. She loved to play piano, having learned to play by ear, and had a beautiful singing voice. Barbara and her sisters and daughters played for hours on her mother’s antique upright piano. She also loved card games. Up until recently, she could still skunk her kids in cribbage, and still played solitaire all day long! Barbara is survived by her children; Ronald, Brian, Brenda (Peter), Steven, and Debora; four grandchildren, Shannon, Jennifer, Brandee (Casey) and Robert (Jessica); five great-grandchildren, Hunter, Kieley, Alyssa, Zeth and Sylas; and many special nieces and nephews. Barbara was preceded in death by her husband Erwin, her parents, siblings, and in-laws. She was the last of her generation in the Rowell and Piper families. The family wishes to express sincere appreciation for the amazing and loving care Barbara received from the staff at Northern Light Continuing Care Lakewood. She was a happy soul who brightened their days as well. A celebration of life will be held at a time when it’s safer for friends and family to gather. Barbara would love it if you fed the birds, ate M&M’s and enjoyed some ice cream! In lieu of flowers, donations may be made in Barbara’s memory to The Dementia Society of America (Life Enrichment Programs), P.O. Box 600, Doylestown, PA 18901, www.dementiasociety.org, or to a charity of your choice.