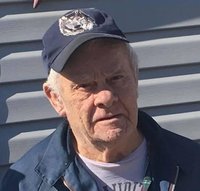 SEARSMONT MELVIN A. WADSWORTH, 89, passed away December 25, 2020 at his home in Searsmont. He was born in Windsor, Maine to Edward M. and Alice (Smith) Wadsworth on March 14, 1931. Melvin served in the U.S. Army from 1953 – 1955 and after an honorable discharge worked as a woodsman throughout most of his life. He also ran the store in Appleton Village, worked at Tannery in Camden for many years, and oversaw the family homestead and chicken farm. Melvin married Erminie Hickman and together they raised a family. For many years prior to her passing, Melvin and Erminie enjoyed travelling to Florida in the winter where they would work together in the orange groves. In addition to his parents, Melvin was predeceased by his wife of 49 years, Erminie Wadsworth, daughter Darlene Pease, and his brother David Earl. Melvin is survived by his children and their families, Dana Wadsworth and wife Kathy of Searsmont, Karen and husband Richard Lane of Rockport, David Wadsworth and wife Edna-Mae of Montana, Vicki Wadsworth of Auburn, Andrea and Leon Lucas of South Carolina, his sister Barbara Borzoni of Waldoboro, a very good friend, Dot Dority, and a large extended family as well. A graveside memorial service in honor of Melvin's life will take place at 10AM on Friday, May 28, 2021 at Pine Grove Cemetery in Appleton.