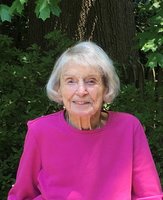 JEANNE HANLON SMITH December 9, 1930 – December 24, 2020 Jeanne Hanlon Smith, 90, of Raleigh, North Carolina, died on Christmas Eve following a brief illness at the home of her daughter in Belfast, Maine. Born in Jersey City, New Jersey to William F. Hanlon and Mae McKinnon Hanlon, Jeanne was one of nine children, two of whom, Robert of Brick, New Jersey and Michael of Asbury Park, New Jersey, survive her. In addition to her parents, she was predeceased by her siblings John (Jack); Dorothy Pare; her twin sister, Joan Vogel Roming, William Jr. and a set of twin girls who died in infancy. Shortly after her birth, the Hanlon Family relocated to several shore towns in Monmouth County, New Jersey, ultimately settling in Interlaken. Early on Jeanne contracted rheumatic fever, leaving her bedridden for many months. She fought the childhood illness and the associated physical, social and academic setbacks with the fierce resolve that would characterize her life to the end. She caught up to her classmates and graduated on time from Asbury Park High School where she served as the scorekeeper for the baseball team. Jeanne attended St. Mary’s College in South Bend, Indiana, then transferred and graduated from St. Joseph’s College in Emmitsburg, Maryland. She declined a law school admission to marry and bore five children, all of whom survive her; Margaret Abrams (Douglas) of Raleigh, North Carolina, Theresa Beitler (Douglas) of Belfast, Maine, Thomas J. Smith, III (Joanne) of Howell, New Jersey, Kathleen Beal (Steven) of Centreville, Virginia, and Mary Susan Check (Timothy Bracken) of Norristown, Pennsylvania. She was “Nana” to fifteen grandchildren: Courtney, Noah, Elliot, Andrew, Jody, Adam, Patrick, Logan, Zachary, Brendan, Gary, Katie, Sam, Brian and William and seven great-grandchildren, Beau, Hanlon, Noelle, Eleanor “Ebee”, Delaney, Pippa and Lily. As she raised her brood, Jeanne turned houses into homes in Fair Haven, New Jersey, Colts Neck, New Jersey and Tampa, Florida. She saw to her children’s educations and through her urging, coaxing and discipline produced two lawyers, two educators and a registered nurse. Each of her children has found loving partners that Jeanne treated as her own. As the children scattered, Jeanne’s professional career rocketed as she rose to Vice-President of a real estate management company outside of Denver, Colorado. When she retired, she relocated to Raleigh, North Carolina and she adapted to her most important role of Nana. She adored her grandchildren, compulsively and quickly exchanging her courtesy license plate (Nanax14, Nanax15, Nanax15+1, etc.) as the clan expanded. She ensured that birthday cards and Christmas gifts arrived on time (sometimes months in advance). She was an adventurous national and inter-continental traveler, visiting Asia, Europe and South America. She rode the Canadian Rockies Train and a Galapagos Island small cruise ship. She climbed the Oregon dunes on the Pacific Coast and attended diplomatic functions in Seoul Korea. She was charming in formal settings and took head-first into the ocean with unequaled enthusiasm. Her unbending optimism and zest continued throughout her life. She will be remembered as a loyal sister, loving mother, cherished grandmother and warm-hearted aunt. The family will schedule a memorial celebration when the global pandemic wanes. In lieu of flowers, donations to the National Multiple Sclerosis Society would be appreciated.