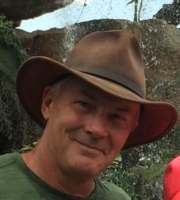 Stockton Springs Paul Scott Caron died June 5, 2020. He was born in Lewiston, Maine November 3, 1957. He was the youngest son of four children born to Jacqueline Dresser Caron and Dominique R. Caron, both deceased. He is survived by his wife Barbara Wallace Caron, son Zachary and daughter Merrill; his brothers Mike Caron and partner Debbi Lasky of Freedom, Maine and David Caron, formerly of Islesboro, and wife Carolyn of Millersburg, Ohio. His sister Judy was predeceased. Paul had a special relationship with his in-laws, Leland and Judith (deceased) Wallace of Waldoboro and his last surviving Uncle Bickley and Lorraine Dresser of Danville, and his sister-in-laws Christine Bryant of Waldoboro and Sherri Kleiber and husband Matt of South Portland. He had numerous nieces and nephews. Paul began his long dedication to medicine while serving as a Navy corpsman, including a period assigned to a Marine unit. He completed his RN certification as a psychiatric nurse and had worked for over two dozen years at Acadia Hospital in Bangor where he was a night nursing supervisor. He cared deeply about the safety and well being of his patients and his staff. That work environment was always stressful, with severe staff shortages that only grew with the special challenges of the current pandemic. He was an avid reader. He particularly loved history. A jack-of-all-trades, Paul could wire, repair and build almost anything. He was a dedicated father and passionate advocate for his disabled daughter challenging various bureaucracies to insure she received the services and accommodations she needed. Paul asked that no funeral services or memorials be held. When it is safe to do so, he wanted his friends to come together somewhere to tip a drink to the man who loved to tinker. Memories and condolences may be shared with the family at www.ripostafh.com