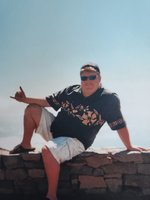 Stephen P. Cummings Sr. passed away unexpectedly at home on Monday May 18, 2020 at the age of 50. Stephen was born on August 14, 1969 and raised in Belfast by his loving parents, Marjorie and James Cummings. He enjoyed holidays, family trips and vacations in the camper, hanging out with the Cedar Street gang, building forts in the woods with the older kids, basketball, pee wee football, baseball, riding bikes, playing Atari and board games with his siblings. Of course, he also loved playing practical jokes on anyone he could. He would often go Trick or Treating in the summer and still get tons of candy and goodies! And when he was old enough, Steve helped out by working at the Bayside Corner Store which was the family business for many, many years. A 1987 graduate of Belfast Area High School, Steve had been an avid wrestler and part of two State Championship wrestling teams in 1986 and 1987. His son Steve Jr. was also a high school wrestler and more recently, he enjoyed watching his youngest son and grandsons wrestle and participate in their sporting activities. He was so proud of them. He was also a huge fan of the Patriots, Celtics, Red Sox and Bruins and could often be seen wearing the team jerseys and hats. For those of you who knew him, you know that Steve had an amazing memory and could recall things most of us forget in an instant. He could remember things like the what the weather was on a particular day 5 years ago, what he got for a birthday present when he was 10, who said what , when and where, whenever and just about everything the rest of us had long forgotten. Stephen also loved to cook and was a great chef. He began his cooking career in the deli at the Bayside Store kitchen and just kept on cooking from there. He was known as the ‘’Grill Master ‘’ at family gatherings and made some of the tastiest appetizers for family parties. He was a very hard worker, often working two jobs at a time and worked at several local and out of town restaurants. Many of his former coworkers recall how much they liked working with him because he was just so fun to be around. Humor was his gift. Stephen was one of the funniest people around and had a quick wit with a dry sense of humor. He often had hilarious commentary and perfect timing during conversation and he enjoyed getting a laugh when he could. It was one of his best talents! He also had acquired a large T-shirt and hat collection with a variety of themes. He loved music especially ZZ Top, La Grange was a favorite and he would often be heard repeating ‘’ a how how how how‘’, Led Zepplin and his all-time favorite Frank Zappa. Stephen was a good man and he was a proud man. He never asked for help but would always be there to help others. He worked hard, played often, and lived his life with enthusiasm. He loved his family and friends, will be missed beyond words and we will keep him in our hearts forever. Stephen was predeceased by his parents Margie and Jim and is survived by his siblings, Cheryl Cummings and Michael Cummings, the love of his life for 36 years , Pamela Elwell, son Stephen Cummings,Jr. and grandchildren Isaac, Dominic and Lyla, son Joey Cummings, daughter Jade Cummings and grandchildren Kinsley and Isaiah and youngest son Jakobe Cummings. He is also survived by many other family / extended family members and friends. Due to the current circumstances from Covid -19, a memorial gathering and celebration of life will be scheduled for a later date. Arrangements are under the care of Riposta Funeral Home Belfast, Me.   Memories and condolences may be shared at www.ripostafh.com