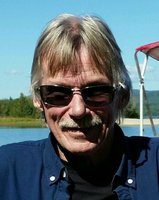 On Friday May 15th 2020, Robert Gordon Lewis Jr., loving husband, father, and "Pop Pop", was called home by his Lord and Savior; Jesus Christ. Robert was born on June 25th 1954 in Rockland Maine to Robert G. Lewis Sr. and Beverly Kitching Lewis. He was the oldest of 3 children. He grew up in West Rockport with his brother "Billy" and sister Jeannie. He attended local schools and received his diploma from Camden High School in 1974. He had a reputation for being a hard worker. Over the years, he held various jobs across the Mid Coast area including Moss Tents, Sprowl Brothers Lumber, and restoring the Rockport Harbor Lime Kiln. On August 20th 1983, he married Terry Lynn Garbotz in the West Rockport Baptist Church. Robert and Terry had two daughters and made their home in Searsmont Maine. Robert loved 70's rock music, family gatherings, and "puttering" around the house. Some of his fondest memories include visiting historic civil war sites with his wife, attending rock & roll concerts with his oldest daughter Carly, and sitting around the home made fire pit with his youngest daughter Jolene. Robert was a home body and finished most days relaxing with his pets and drinking a cold beer. Robert was predeceased by his father Robert Lewis Sr., mother Beverly Lewis, brother William Lewis, and his beloved "Uncle Chummy". He was survived by his wife of 36 years, Terry Lewis of Searsmont, sister Jeannie Lewis of West Rockport, daughter Carly Mercer of Belfast and her three children; Eiyah Jackson, Ayanna Jackson, and Ethan Mercer, his daughter Jolene Lewis of Washington DC and her two children Marques Warren and Emre Lafortune. The family has attended a private viewing. A celebration of Roberts life will be planned and announced for a later date. Arrangements are under the care of Riposta Funeral Home in Belfast. Memories and condolences may be shared with the family at www.ripostafh.com