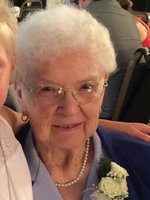 Anna D. Roberts, 87, passed away peacefully on May 10th at home with her family by her side.  Anna was born in Waltham, MA to Eric Anderson Sr and Adelia Anderson. As a young girl the family moved to Brooks, Maine where Anna met and later married Joseph Roberts, Sr. and together they raised five children. Anna worked in the bean factory in Brooks, Moeller & Clark and Bradbury Manor and Harbor Hill as a CNA for many years where she was well respected and loved by her coworkers and the residents.  Anna & Joe also had a chicken farm in which they raised broiler chickens for Penobscot poultry as well as Roberts greenhouse and roadside stand where they sold fresh vegetables throughout the summer.  Anna was one of the 1st members of the Brooks Ambulance where she served the community for many years. She was also a member of the Eastern Star. Anna was best known as a homemaker and caregiver. She was a selfless woman known for her kind heart, and always found joy doing for others. She was known for her baking, specifically her decorated cakes she sold to the community and her homemade BBQ sauce served at the Robert's chicken BBQ at the Brooks fair on the 4th of July. Anna loved her family unconditionally and would jump to visit or attend the great grandchildren's activities whenever she could. Her family remembers all the special acts of kindness she did for them, such as delivering homemade meals after a day of work along with her many sweets. Anna always made room at her table for anyone and took joy in their company. Anna especially loved Christmas and Christmas Eve gatherings, where we could always count on all our favorite goodies. She was a gifted crafter and she made countless quilts and clothes for the grandchildren as well as knit sweaters, mittens, slippers, afghans, and Christmas socks. She made beaded Christmas ornaments for the family and spent special time teaching her grandchildren her crafts. We will cherish each special memory forever. Anna is predeceased by her parents, Eric Anderson, Sr and Adelia Anderson, husband, Joseph Roberts, Sr and sister Nancy Raymond. Anna is survived by her children, Joseph Roberts Jr from Knox, MaryAnn Meek and husband Jim from Augusta, Jane Bowden and husband Brian from Frankfort, Thomas Roberts and wife Donna from Knox and William Roberts and wife Jeri from Jackson.  Anna is also survived by a 2 brothers, Eric Anderson, Jr  and wife JoAnn from Stow, MA and Richard Anderson and partner Connie from NH, sister in law Charlene Wren of Thorndike, brother in law Robert Roberts and wife Pat from Brooks, brother in law Arthur Roberts and wife Cyndy from TX and sister in law Sheila Moody and husband Ronnie from Troy, several grandchildren Jason Patterson and wife Jennifer from Oregon, Brennen Bowden and fiancé Beth Lipscomb  from Battle Creek, MI, Logan Bowden and wife Jamie from Portland, OR,  Sarah Clark and husband Roland of Brewer, Matt Cole and partner Corrie Brown from Gorham, Jennifer Larrabee and husband Derek from Knox, Amy Martin and husband Kurt from Knox, Katie Roberts from Hampden and Eric Roberts and wife LeeAnn from Plymouth.  Anna is survived by several great grandchildren, Gavin Carr, Kaiden Bowden, Braden Carr, Conner Bowden, Anna Carr, Jordan Larrabee, Ryan Larrabee, Veda Bowden, Roscoe Bowden and Oakley Cole. Anna also is survived by many nieces and nephews and a special friend Dorothy Seekins. Anna will be remembered by her loved ones for her kind, generous and thoughtful heart. We hope to honor her by continuing to spread kindness and love of life. A special thank you to Harbor Hill nursing home, Dr. Suetta Tenney, Dr. Elizabeth Duke and all the amazing nurses while Anna was a resident at Harbor Hill. Also to Kimberly Stone and Dave Millay from hospice care. Arrangements are under the care of Riposta funeral home in Belfast with a celebration of life to be planned when it is safe to gather. Any donations in her memory may be made to the Alzheimer’s Association. Memories and condolences may be shared with the family at www.ripostafh.com