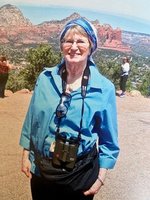 Barbara Ann LeGendre, 75, of Union, Maine died at the Sussman House in Rockport, Maine on February 4, 2020 after a short illness. Born in Kansas City, Missouri on November 11, 1944, she was the daughter of Dr. Robert and Doris (Mailloux) LeGendre. Barbara grew up in Brunswick, Maine, where her father practiced dentistry for many years. Barbara graduated from Brunswick High School in 1962, and attended Westbrook College where she attained a degree in dental hygiene. After practicing dental hygiene for a number of years, she decided to pursue her true love—English and literature. She graduated from the College of Wooster (Ohio) with a BA degree in English in 1975 and a Master of Arts in Teaching at Wooster in 1976. Barbara earned her PhD in English from Case Western Reserve University in 1985, and she became an expert in Twentieth Century British and North American literature. She was especially interested in the role of women in Canadian literature. After teaching English at the College of Wooster, she was appointed as a senior lecturer in English at Cornell University in Ithaca, New York, at the John S, Knight Institute for writing in the Majors, where she educated countless Cornell students for 22 years until her retirement. She loved the student-teacher relationship and the special experiences with them in the classroom. Being the consummate innovator, Barbara took great pleasure and pride in “taking academic risks in the classroom,” pushing the envelope of the student’s concept of literature and to great success. After retirement, Barbara did not give up her love of teaching. She was an instructor at the Coastal Senior College in Belfast, Maine. There she discovered the joy of teaching seniors. Always interested in birding, Barbara and her husband, Bob, were involved in the Cornell Lab of Ornithology. Second only to English literature was her love and expertise in birding. She birded nationwide and in exotic locals around the world. She was a lifelong voracious reader and a learner. In any conversation with her on literature or writing, one could sense her amazing insight and understanding in the writings. Barbara is survived by family: husband Robert Meade of Union, Maine; daughter, Jenna Harrison (Jeff) and grandchildren, Evelyn and Eli of Maplewood, Minnesota; brother Dr. Robert F. LeGendre (Karen) of Warren, Maine, and sister, Jane L. Muszynski (Michael) of Longwood, Florida. Honoring Barbara’s wishes, no service or memorial is planned. Donations can be made in her memory to Avian Haven Wild Bird Rehabilitation Center, 418 North Palermo Road, Freedom, Maine 04941. (https://www.mightycause.com/organization/Avian-Haven)