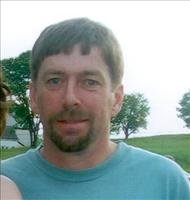 DANIEL “DANNY” S. MILLER, 42 of Liberty, died unexpectedly in Palermo on June 24, 2009. He was born in Belfast September 6, 1966, son of Linda (Turner) and Louis A. Miller Sr. He was a lifetime resident of Liberty. He enjoyed working on motors and driving. It was said Danny “could fix most anything.” He enjoyed cooking out and feeding friends. He especially loved his children and his family. He was predeceased by his father in 2007 and is survived by his mother, Linda Miller of Liberty; his friend and mother of his children, Amy Eggen of China; 3 children, Brooke, Sabrina, and Trevor Miller, all of China; a brother Louis A. Miller Jr. and his companion Gail Pomerleau of Palermo; maternal grandmother, Doris Turner of Camden; sister Joy Mehuren and husband James of Searsmont, a niece, Joanna; nephew James Jr. and one great nephew, J.D. A time of visitation will be held from 12-2 Saturday, June 27th at Liberty Baptist Church followed by a graveside service at 2 p.m. at Hunt Memorial Cemetery in Liberty. On-line condolences may be placed at www.crabielripostafuneralhome.com.