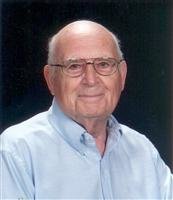 RODNEY M. ROBBINS, 87, died on August 9, 2009 in Belfast after a brief struggle with cancer. He was born in Belfast, the eldest of eight children of Charles F. and Mary (Burden) Robbins, on September 16, 1921. Rod grew up during the Depression years, and at that time he felt it more important to get a job and help his family than to continue school. He worked at many jobs back then - harvesting ice, raking blueberries, cutting wood and finally found more steady work in Belfast shoe factories. In 1942 Rod married Ruth Elizabeth Walker and together they raised their three children. Rod never traveled or went on vacations. Instead he bought and sold 10 houses, renovating them while living in them, thus making a small profit which enabled him to provide a little extra for his family. In 1968 Rod became superintendent of the Belfast cemeteries. He worked at making the cemeteries places of beauty and neatness. Rod was instrumental in expanding Grove Cemetery into the size that it is now, building a new workshop and updating equipment for his men. Rod had few hobbies; he did enjoy visits to Owls Head to see the old cars and planes, liked old Western movies and listening to Johnny Cash and Buck Owens songs, discussing politics and sharing visits with his grandchildren. Rod was a member of the Belfast United Methodist Church and liked to frequent public suppers there. Rod was a fan of his children and grandchildren, to whom he often gave advice, and they listened to it graciously. He is survived by his wife of 67 years, Ruth (Walker) Robbins of Belfast; a son, Roger E. Robbins and his wife Linda Cammarota of Newbury NH; a daughter Donna M. (Robbins) Costa and her husband Roger of Somers, CT; a son-in-law Stephen M. Boguen of Belfast; a brother Fred Robbins of Kittery; three sisters-in-law, Mrs. Larita Gray and her husband Maynard of Fairfield, Mrs. Lillian Green of Belfast and Mrs. Ruth Merry Robbins of Belfast; five grandchildren, Kevin R. Kibbe and his wife Doreen of Enfield, CT, Christopher G. Kibbe and his wife Angie of Enfield, CT, Roger A. Kibbe and his wife Michelle of Coventry, RI; special granddaughter Amanda E. (Boguen) Munson and her husband Patrick of Belfast and Michael S. Boguen of Belfast; ten great-grandchildren along with many nieces, nephews and cousins. Rob is predeceased by his parents, Charles F. and Mary (Burden) Robbins; his brothers, Charles, Newell, Russell, Herman, Everard, and his sister Lillian all of Belfast and a daughter, Jan Elizabeth Boguen of Belfast. A special thank you is given to Kathy Warner, RN from Waldo County Home Health & Hospice for her kind and caring touch. A graveside service will be held 2 p.m. at Grove Cemetery in Belfast on Wednesday, August 12th. A celebration of Rod’s life will be held following the service at the Belfast United Methodist Church, Mill Lane, Belfast. In place of flowers, donations in Rod’s memory may be made to Waldo County Home Health Care & Hospice, PO Box 772, Belfast, ME 04915. Arrangements under the care of Crabiel-Riposta Funeral Home, 182 Waldo Avenue, Belfast.