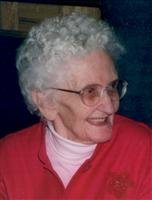 OLGA ELLEN GREENLEAF, age 88, passed away October 9, 2009 at Tall Pines in Belfast, Maine. Olga was born December 30th 1920 in Frankfort, Maine, the youngest daughter of Leo and Esther (Moody) True. She attended school in Frankfort and married Lester Greenleaf in 1936. She lived in Frankfort and Winterport area until 1962 when she moved to Belfast to be nearer work. Olga worked in the poultry plants for years then in nursing homes. She worked at Bradbury and also Bayview nursing homes and also did home care. She spent several years in Dover-Foxcroft assisting in the care of her brother-in-law before coming back to Swanville and living with her son Vincent and wife Ellen. Olga developed Alzheimer’s and moved into Tall Pines nursing facility. Olga is survived by three sons, Reginald and wife Phyllis of Brooks; Vincent and wife Ellen of Swanville; David and wife Ethel of Montville; one daughter, Roberta and husband Jim of Newton, Iowa; 17 grandchildren; 36 great grandchildren; 5 great great grandchildren; several nieces and nephews. Olga was preceded in death by her husband; two sons, Daniel and Dwight; two sisters, Bessie Ryan, and Lilla Scribner. A graveside service will be held at 11:00 a.m. Saturday October 17, 2009 at Oak Hill Cemetery in Winterport. Arrangements are under the care of Crabiel-Riposta Funeral Home 182 Waldo Avenue Belfast. Online condolences may be placed at www.crabielripostafuneralhome.com